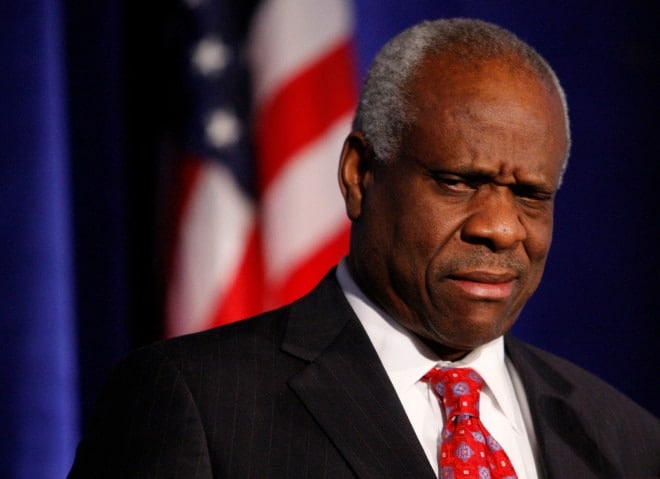 “Can you think of another constitutional right that can be suspended based upon a misdemeanor violation of a State law?” asked Justice Thomas on Monday. (Photo: Charles Dharapak/AP)

In one of the rare gun cases accepted by the high court in recent years, Justice Clarence Thomas asked questions in oral arguments of a federal attorney.

Seated next to the late Justice Antonin Scalia’s black-draped chair, Thomas, who was part of the landmark 5-4 Supreme Court decisions in favor of gun rights on the Heller and McDonald cases, broke his self-imposed silence by asking questions of the government’s attorney during oral arguments Monday.

The case, Voisine v. U.S. focuses on lower court convictions of Stephen L. Voisine and William E. Armstrong for firearms possession after they had been convicted of simple assaults, and questions the court if a non-violent case of reckless behavior without intent qualifies as a “misdemeanor crime of domestic violence” under federal law, thus barring them from firearms possession.

In each man’s case, they were both convicted of assaulting domestic partners before police, responding to subsequent criminal complaints, found the men with firearms.

Although Voisine is a gun case with the question of gun rights themselves off the table – instead focusing on domestic violence – it was Thomas who asked the only questions framing a Second Amendment argument.

“Can you think of another constitutional right that can be suspended based upon a misdemeanor violation of a state law,” Thomas asked Justice Department lawyer Ilana Eisenstein, as noted by the court transcript.

This put Eisenstein on the defensive, to which Thomas followed up by asking if, “recklessness is sufficient to trigger a violation­­ misdemeanor violation of domestic conduct that results in a lifetime ban on possession of a gun, which, at least as of now, is still a constitutional right.”

Eisenstein attempted to formulate an answer before Thomas cut her off with, “Can you think of another constitutional right that can be suspended based upon a misdemeanor violation of a state law?”

In the end, while not citing specific instances, the DOJ lawyer argued that in some cases First Amendment rights to free speech or free association have been curtailed.

Thomas closed by asking Eisenstein how long such a firearms right suspension would last in such a case, to which she answered, “the right is suspended indefinitely.”

This led to further questioning by Justice Stephen Breyer, in which Eisenstein argued that even the gun ban itself was not absolute, as those subject to it, for instance in the case before the court, could pursue a pardon from Maine’s governor, which would restore their rights.

“If this, in fact, triggers a lifetime ban on the use of a gun, then do we not have to decide something we haven’t decided?” asked Breyer. “And I think it would be a major question.”

The retired federal public defender helming the case for the two men argued there is a different interpretation of Maine’s state law in respect to purposeful acts and accidental or reckless acts, when compared to federal law.

The news of the long silent Justice weighing in quickly circled the globe from Japan to the UK.

As court watchers have long-noted, Thomas eschews asking questions during oral arguments as he prefers to listen. He has not, however, refrained from expressing himself, penning a stinging dissent in the high court’s refusal to hear a case challenging San Francisco’s mandatory gun lock law, and again in an Illinois assault weapon ban last year.

Notably, Thomas replaced Justice Thurgood Marshall on the bench, another jurist who was well known to keep silent during oral arguments.

Gun control advocates were quick to find fault with Thomas on Monday.

“Today the Supreme Court heard Voisine v. United States, which will decide if individuals convicted of a misdemeanor crime of domestic violence should be allowed to possess guns,” noted Everytown on social media, referencing a Think Progress article on Thomas speaking in court. “The stakes of this decision will be measured in lives.”