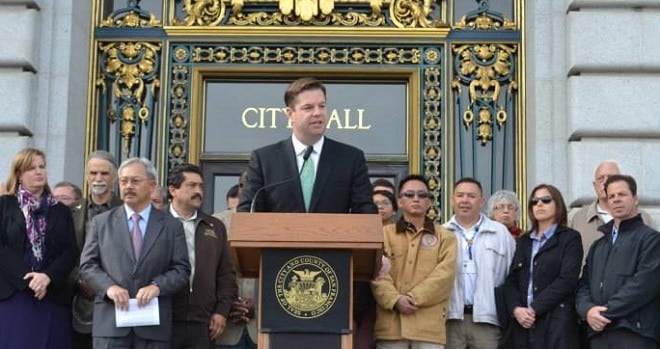 The lawmaker responsible for driving gun shops out of the city wants firearm owners to put a lock on any of their weapons not in use. (Photo: sfgov)

San Francisco Supervisor Mark Farrell this week proposed enhancements to the city’s mandatory handgun lock laws that would expand the mandate to all firearms.

In 2007, San Francisco implemented a local ordinance that compelled handgun owners to secure their firearms either locked inside a container or disabled with a trigger lock. A legal challenge, backed ultimately by 26 states, was defeated at every turn all the way to the Supreme Court last year.

“The unsafe storage of firearms threatens public health and safety in San Francisco and across the country,” said Farrell in a statement. “We owe it to our families and children in the City to be as aggressive as possible with legislation that will promote public safety, ensure proper handling and storage of firearms within our city limits, and prevent gun violence in our neighborhoods.”

Farrell’s measure, introduced Tuesday at the Board of Supervisor’s meeting, would require that all modern firearms must be kept in a locked container, or be disabled by a trigger lock approved by the California Department of Justice. Under current law, only handguns, and no other long-guns, such as rifles or shotguns are subject to locked container and trigger lock requirements.

Gun rights advocates have long argued the city’s existing law flies in the face of the U.S. Supreme Court’s 2008 ruling in the Heller case in which Justice Antonin Scalia wrote that such requirements violate the Second Amendment, which he noted provides for a, “lawful firearm in the home operable for the purpose of immediate self-defense.”

The plaintiffs in the failed challenge to the law, six San Francisco residents who keep handguns in their homes, argued that it was impossible to carry a firearm while sleeping, for example, and by ordering them to lock their guns up when doing so, the city denied them the right of self-defense.

With the law sustained by the courts, other California cities to include Oakland, Santa Cruz and Los Angeles have made movements towards requiring gun locks in their respective areas.

Prospects look good for the expansion in the Golden Gate City.

Farrell has a long history of backing anti-gun measures, having introduced new regulations on gun dealers in the city that ultimately led to the last gun shop in San Francisco closing their doors.

Likewise, the board and Mayor Ed Lee have shown an appetite for more gun control, unanimously passing this year a new law stepping up gun lock laws for firearms left inside vehicles in the city limits.

The new measure, under the 30-Day Rule, will be heard in committee in the coming month.