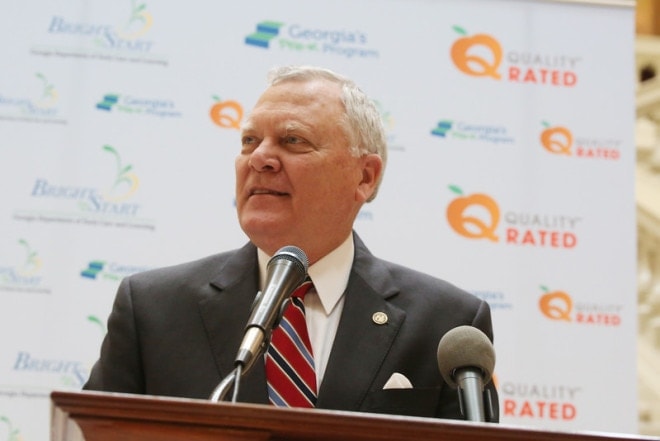 Gov. Nathan Deal said he has heard all the “hype” from gun control advocates before and isn’t concerned about a move to bring concealed carry to college campuses in the state (Photo: photos.gov.georgia.gov)

Republican Gov. Nathan Deal is supporting a House proposal now under consideration in the Senate that would allow concealed carry at public college and universities in Georgia.

The bill, which passed the House in a GOP-heavy 113-59 vote on Feb. 22, would allow licensed concealed carry on campuses except in buildings or property used for sporting events and student housing.

On Monday, Deal, with House Speaker David Ralston in tow, dismissed claims by gun control advocates that allowing guns on campus would lead to increased violence, remarking similar arguments were made when he signed the state’s so-called “Guns Everywhere”  bill into law in 2014, which rang hollow.

“We heard all the hype that we’re now hearing about campus carry, all the predictions of tragedies. All the predictions that we were going to open our state up to a Wild West scenario,” said Deal, as reported by the Atlanta Journal Constitution. “So, therefore, to use those kind of arguments with the campus carry discussion, I think lacks validity.”

The legislation, HB 859, would allow those with a Georgia Weapons License to carry a concealed handgun in or on most buildings or property owned or leased by a public post-secondary school in the state. Exceptions would remain in place for sporting arenas and stadiums and for student housing such as on-campus dorms, sororities and fraternities.

Citing a survey funded by former New York Mayor Michael Bloomberg’s Everytown group that found 78 percent of Georgians oppose such a move, gun control advocates are hoping the bill will stumble in the Senate.

“Passing legislation that forces our colleges and universities to allow anyone with a concealed carry permit to carry a gun on campus is a shame for student safety,” said Lindsey Donovan, with the Georgia chapter of Moms Demand Action in a statement. “Once again, four out of five Georgians believe guns have no place on campus. We urge the Georgia Senate to reject this dangerous bill and to not add guns to environments rife with alcohol, drugs, and academic pressures.”

“Georgia Weapons License holders do not present a threat to public safety, as they are one of the most law-abiding segments of the population,” reads an alert from the NRA’s Institute for Legislative Action. “These individuals should not be prevented from exercising their right to self-defense simply because they choose to seek a college education.”

Currently allowed in eight states, campus carry has proven controversial in state houses across the country in recent months. California, which long allowed the practice, repealed it last year despite the fact that advocates for the measure could not cite a single instance of a lawful permit holder being involved in a school shooting in the state.

In Texas, the latest state to allow for lawful conceal carry, has seen its own share of public debate and media attention over that decision.

The Georgia bill is scheduled to be heard by the Senate Judiciary Committee on Wednesday. With a 39-17 GOP hold on that chamber, passage of the measure without change from its current form would place it on Deal’s desk.