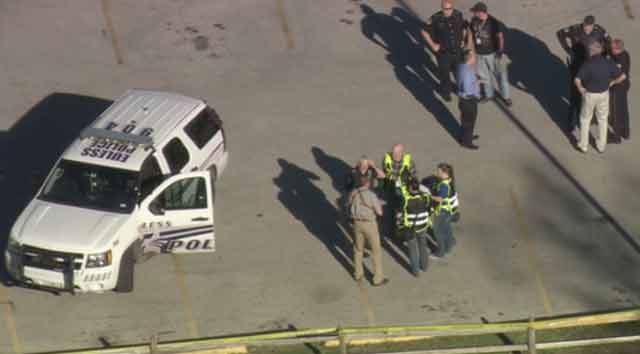 Authorities gather at the scene after one of their fellow officers had been shot. (Photo: WFAA)

A 29-year-old police officer was killed in the line of duty Tuesday afternoon while responding to a call about shots being fired at a park in the Fort Worth suburb of Euless.

David Hofer was one of several officers who responded to the call, which came in around 2 p.m. According to Euless Police Chief Mike Brown, upon arriving at the J.A. Carr Park, officers were met with gunfire and a shootout ensued.

The Dallas Morning News reported that the suspect was armed with a high-powered rifle, but authorities have not yet confirmed this.

Hofer was shot, but fellow officers returned fire, striking the suspect as well. Both Hofer and the suspect, whose name has not been released, were transported to the hospital. Hofner underwent surgery in an attempt to save his life, both those efforts failed and he died in the middle of the procedure. The suspect was also pronounced dead at the same hospital.

Hofer grew up in Brooklyn and after serving five years with the NYPD, joined the Euless Police Department last January. He was engaged to be married and also survived by his mom and dad, a brother and a sister. Hofer was remembered as a man with a servant’s heart and “dry wit.”

The department asked for respect and consideration for Hofer’s family during this difficult time. Local residents gathered outside of the police department, placing flowers and candles at a makeshift memorial, while others formed a circle and offered prayers, a local ABC affiliate reported.

Hofer was the second officer to be killed in the line of duty in the department’s entire history. Officer Michael Ray Williamson, who was a 30-year-old father of six, was killed by a drunk driver while he was on patrol back in 1982.