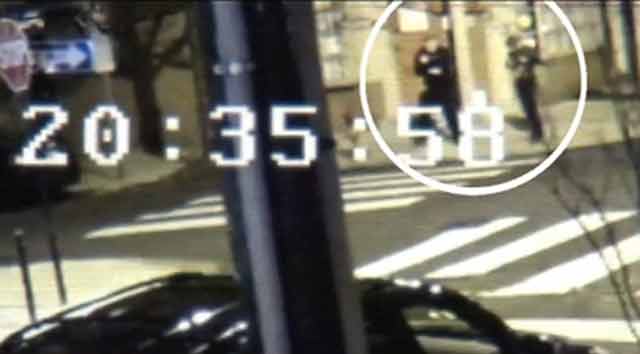 Immediately after the shooting, the two suspects took off down the road, their images captured on surveillance video at a nearby business. (Photo: ABC)

Two young men are in the hospital, both recovering from gunshot wounds after they attacked a 65-year-old man and his wife near their home in Philadelphia Tuesday night.

Residents say the Queen Village neighborhood is typically quiet, but that wasn’t the case earlier this week. The older gentleman and his wife were out walking around 8:30 p.m. when they were accosted by two younger men. An argument ensued, then quickly turned physical.

One witness, who did not want to be identified, described to a local CBS affiliate what she saw next.

“I heard shouting and I saw the guys punching our neighbor,” she said, noting that she never saw her neighbor assault the younger men.

The woman said her neighbor was just lying on the ground being beaten. Another witness said the older man was covered in blood.

“His eye was all bloody, like the actual eye ball looked like it was bloody,” she recalled. “He had blood all over his face and neck.”

Moments later, however, those witnesses heard gunshots and the beating stopped. Authorities say the 65-year-old shot both of the younger men with a .45-caliber handgun.

Kenneth Young, the couple’s attorney, said the victim told his assailants beforehand that he was armed with a gun, but they did not care. Young said the man and his wife, who was also attacked, tried to pull away and begged them to stop, but the suspects continued to attack the couple.

Officials confirmed the victim has a valid license to carry a concealed firearm, and Chief Inspector Scott Small indicated it will likely be considered a case of self-defense, although ultimately that decision will land on the district attorney once the investigation is completed.

“I think the moral of the story is you just never know who’s packing heat,” said neighbor Anthony Conte, who called the victim “Old Man Sal.”