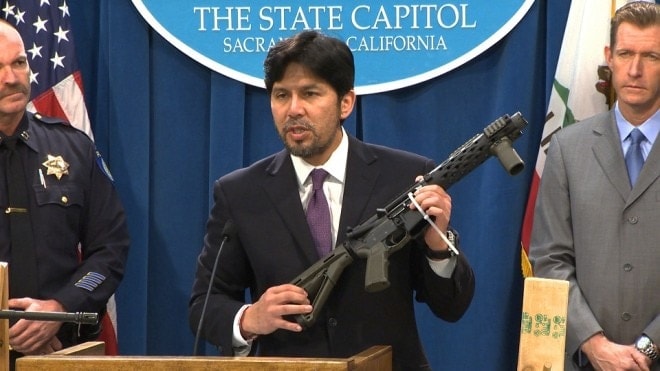 Sen. Kevin de Leon has conjured his old Ghost Gun legislation back from the grave and introduced it to the state Senate. (Photo: KCRA)

State Sen. Kevin de Leon gained internet infamy for his efforts to regulate otherwise legal homemade guns in 2014 and is now back for round two.

A rehash of his efforts to require background checks and serial numbers on DIY firearms that met with a rare veto from Gov. Jerry Brown, de Leon, who is the current California Senate president pro tempore, introduced the measure late last month without comment.

The Los Angeles Democrat’s proposal, SB 1407, would require a state Department of Justice Bureau of Firearms background check and authorization before assembling a firearm in the home of a state resident. Additionally, before this could be granted, the candidate would have to show proof that building the gun would not violate local city or county codes. In effect, adding multiple layers of regulation to a process which is already legal under federal law.

It would further require those who in the state that have already made their own gun after December of 1968 to obtain and engrave or affix a DOJ-issued serial number and prohibit the sale, transfer or inheritance of these guns. Handguns made back to 1898 would also have to be serialized.

Noncompliance would be deemed a misdemeanor but could result in up to a $1,000 fine and/or a year in prison.

De Leon’s efforts to regulate what he termed to be Ghost Guns proved galvanizing for efforts to make such firearms even more accessible. Besides regulated finished receivers in a bright rainbow of colors, Cody Wilson, the man behind the first 3-D printed gun, built a miniature CNC machine designed to complete home-built AR-15 lowers, naming it the Ghost Gunner as a hat tip to the lawmaker.

“It just seemed to be such an affront and also a challenge,” Wilson said at the time. “We used his creation and his words to trademark the project.”

Second Amendment advocates aren’t impressed with the resurrected legislation creeping the halls of Sacramento this session.

“To expect that a criminal will take the time to build a firearm for use in a criminal act and in the process, stop to get a serial number for it is ludicrous,” Craig J. DeLuz, director of communications with the Firearms Policy Coalition, told Guns.com.

Among the specific tenets of the legislation the gun rights group found puzzling is the requirement to serialize guns that in some cases may be decades old and are unlikely to leave the owner’s gun case anytime soon.

“How is the serialization of curios and relics going to reduce gun violence?”

Added to other gun measures

On Tuesday, the Assembly Public Safety Committee gave its stamp of approval to a pair of bills in a 5-2 party-line vote that would effectively close what the lawmakers term the “bullet button loophole” by banning devices which require a tool to remove an otherwise fixed magazine from a semi-automatic rifle and require guns already fitted with such buttons since 2001 to register them as “assault weapons” under California law.

The committee likewise approved a measure to cap sales of rifles and shotguns in the state to one per month.