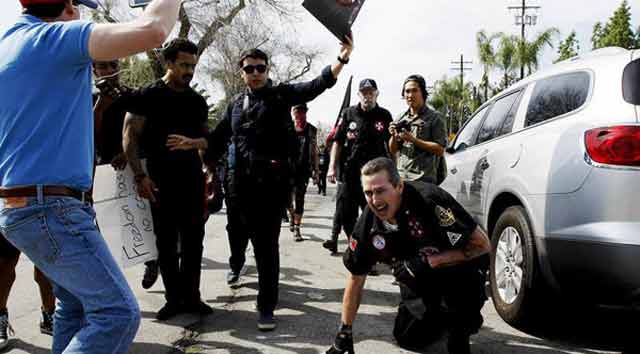 A member of the Ku Klux Klan who was attacked by protesters at a rally in Anaheim over the weekend said they asked for a police presence beforehand, but were told no.

Will Quigg told the Associated Press in an interview that when he contacted the Anaheim Police Department about security, he was told, “We don’t do that.”

Quigg said he then asked about the group hiring their own security for the rally, to which he received the response, “No, you can’t do that either.”

During a clash between the Klan and protesters, three people were stabbed, and it wasn’t until some time after the violence erupted that police arrived on the scene. In fact, as Quigg was knocked to the ground and beaten, one man – who incidentally is Jewish – stood between the downed Klansman and the group of guys that wanted to harm him.

Police Sgt. Daron Wyatt, with the Anaheim Police Department, assures that there was a police presence at the rally when the violence erupted. However, no witnesses have come forward saying they recall seeing any uniformed officers until after the stabbings occurred.

Likewise, Wyatt denies Quigg – or anyone else – was told they couldn’t have a security detail, but says Quigg wanted personal security, which they would not do.

“He was told how to contract for officers to do that, but did not want to spend the money,” Wyatt said.