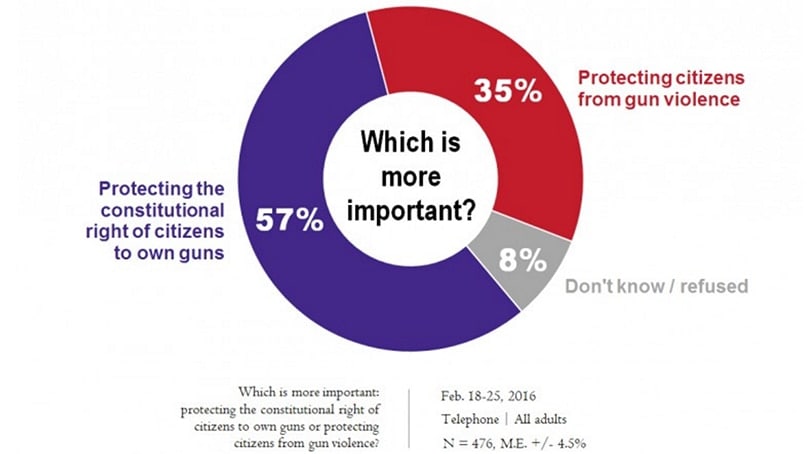 A majority of North Carolinians value the right to keep and bear arms over protecting its citizens from gun violence, according to a High Point University poll released Wednesday.

Some 57 percent of phone survey respondents said protecting the Constitutional right provided by the Second Amendment was more important than protection of citizens, to which only 35 percent said they favored.

Many in the gun rights community would see the two questions at odds since some believe the more guns carried by responsible gun owners, the safer a citizenry. Gun rights champion John Lott outlined the proposed phenomenon in his book, “More Guns, Less Crime.”

Though many of those polled prefer their gun rights be preserved, an overwhelming majority – 89 percent – favor so-called universal criminal background checks on all gun purchases, including those made between private individuals and at gun shows, the survey found. Only 8 percent opposed such regulation.

Currently, North Carolina law doesn’t require a federally-licensed gun dealer to run a background check through the Federal Bureau of Investigation’s National Instant Background Check System so long as the purchaser has a valid state permit to purchase a handgun and several long guns can be bought during that single transaction, according to the state attorney general’s office.

Sales between private parties are also subject to state pistol permits, which are issued by a sheriff of the county an individual resides. The permits are also required when someone inherits a gun after the death of a relative or other individual.

The National Rifle Association announced Wednesday that it was backing Sen. Richard Burr for another term in the U.S. Senate during the North Carolina Republican Primary on March 15. Burr is the senior senator from the state and has long opposed universal background checks.

The NRA opposes mandatory universal background checks for several reasons and have gone on the record saying if the checks were fast, free and didn’t create a national registry, many gun rights advocates would not oppose the measure.

The state was 23rd in the number of deaths caused by firearm injury in 2014 at 11.8 per 100,000 population, according to the Kaiser Family Foundation.

Following the gun rights mantra of more guns, the poll found that only 45 percent favored allowing teachers to carry on school grounds for protection and 48 percent opposed such a measure.

Some 52 percent of respondents opposed reducing access to violent movies and video games in order to help prevent gun violence, while 42 percent said they would favor such a move by lawmakers.

On the subject of banning “assault-style” weapons, 52 percent support it, while 42 percent oppose it.

Banning the sale of ammunition online was also popular with 53 percent of those surveyed, while 42 percent oppose it. Some 56 percent of respondents would also favor banning high-capacity magazines, incorrectly termed “clips” by the survey, while only 40 percent oppose of doing so.

A whopping 84 percent of respondents said that enforcement of existing gun laws should be improved, while 11 percent opposed the need. A large majority 88 percent – said that the mentally ill who show violent tendencies should be provided services, while 7 percent disagreed.

The survey was conducted from Feb. 18-25 on 476 adult North Carolinians, but the results were similar to a February 2013 poll, the university said.

“Our HPU Polls keep finding similar things about North Carolinians beliefs about guns,” said Dr. Martin Kifer, assistant professor of political science and director of the HPU Poll, in a statement. “As a group, people of our state tend to emphasize gun rights, but there are areas where there is a lot of agreement about some concrete measures to address gun violence.”