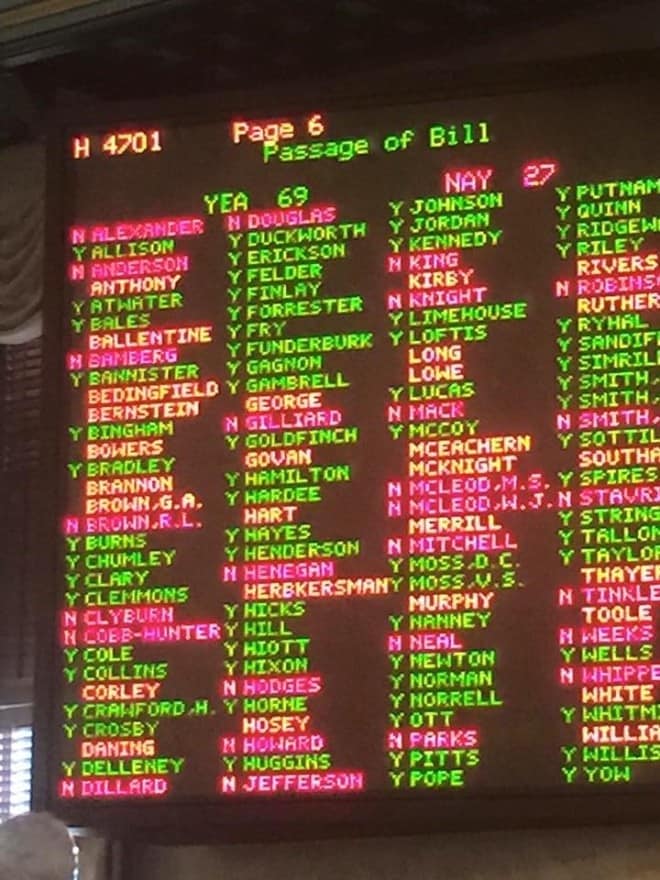 A move that would thumb the state’s nose at Washington D.C.’s gun laws found support of a healthy majority in the South Carolina House this week. (Photo: Rep. Mike Pitts)

The South Carolina House approved a measure by a two-thirds majority to nullify support for federal gun laws in the state.

The measure, introduced by chamber Republicans in January, passed a 69-27 roll call on Wednesday and a final 64-30 vote on Thursday, sending it to the Senate for further consideration. It would forbid supporting enforcement of any law federal law deemed to infringe the right to bear arms.

“I am very pleased that the SC House passed my bill that would preserve our 2nd Amendment rights from federal overreach,” noted Rep. Mike Pitts, R-Laurens, the legislation’s sponsor, on social media.

The lawmaker drew national attention when he advocated journalists should have to register with the government before being allowed to cover news events, citing sour coverage of gun issues, as well as efforts to bring permitless concealed carry to the Palmetto State.

Pitts’ current proposal, HB 4701, the Second Amendment Protection Act, would refuse to recognize any new limits on the right of a person to own, possess, or use a firearm, ammunition, or firearm accessory from Washington. As such, it will not allow any state or local money to assist federal law enforcement in the implementation of those laws, nor accept any federal funds tied to future mandates.

Opponents of the measure noted concerns over domestic terrorism for attempting to block its passage.

“I think that there’s some merit in sending a message to Washington that we’re going to protect the Second Amendment rights of law-abiding citizens,” Rep. Leon Stavrinakis, D-Charleston told the Post and Courier. “But I don’t want to be a part of a bill that cements the rights of criminals and deranged people and terrorists to wreak havoc. After what we’ve been through in Charleston and what we’ve seen happen around the world and in this country with domestic terrorists, it’s just something I could not support.”

The measure now proceeds to the GOP-controlled South Carolina Senate where passage there would place it on the desk of Gov. Nikki Haley, a Republican who is seen to be pro-gun.

Efforts at similar nullification measures are afoot in Arizona, where a bill with much the same language as in South Carolina won over lawmakers in the state House last month.