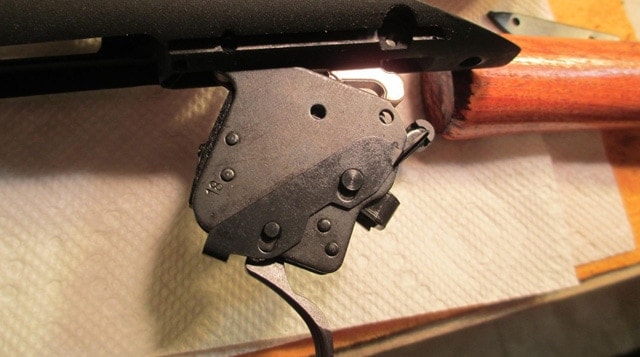 The trigger box to a Walker Fire Control mechanism taken from a Model 700 rifle. Using the image, the photographer discussed maintenance. (Photo: ShootersForum.com)

The infamous Remington trigger defect has been tied to a hunting accident involving a Texas man whose injury resulted in him having half his leg removed.

Attorneys representing Ernest Ray Arnold, of Emory, Texas, filed the civil suit in an east Texas federal court late February alleging a known defect in a Model 700 caused the rifle to discharge unexpectedly. A bullet subsequently injured Arnold in his right leg, which he later had to have removed below the knee.

According to the complaint, the incident occurred when Arnold was on a hunting trip with friends in late November 2015.

While getting into a vehicle, Arnold grabbed the Remington 700 rifle, which belonged to his buddy, that had the bolt up and muzzle pointed down, the lawsuit says. As Arnold shifted the rifle from one side to another, it suddenly discharged, striking him in the leg.

The lawsuit describes the rifle as “unreasonably dangerous” because the gun’s defect allows it to fire without the pull of a trigger; the bolt that when tapped and pushed down will cause the gun to fire; and fails to provide adequate safety. Also, the lawsuit alleges “the rifle was not properly tested” nor was it “subjected to proper engineering analysis” by the manufacturer.

Arnold seeks damages valued at more than $75,000. The cost is derived from actual damages, economic damages, interest, court costs, and any other relief deemed proper by the court.

The Remington 700 has been the subject of dozens of lawsuits involving personal injury or death that allege the rifle is equipped with a faulty trigger design. Most recently, Remington settled a class action suit over the 700’s previous trigger design, the Walker Fire Control, that could result in the company recalling or repairing several million rifles. The settlement has been under negotiation since ordered in July 2014.

Remington’s replacement trigger design, the X-Mark Pro, has been the subject of only a handful of cases. The gun maker recalled early Model 700 rifles equipped with the design because of accidental discharges. The issue was not with the design per se but rather the application in which it was fitted to the rifle.

Arnold’s complaint did not specify what trigger design was featured on the rifle in question. His attorneys did not respond to requests for comment.