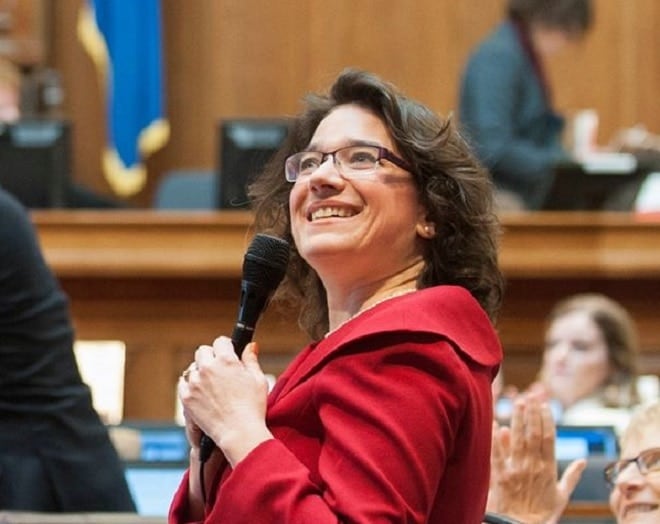 State Rep. Melissa Agard Sargent, a fan of Australian-style gun control, would like to see a special tax on gun and ammo sales spent on buying back guns to be destroyed. (Photo: Facebook)

A bill floated by urban Democrats in the state Assembly last week could see gun owners foot the bill for often ineffective gun buybacks every time they purchase a firearm or ammunition.

Backed by Milwaukee and Madison Democrats including Rep. Lisa Subeck who sought a ban on most semi-automatic weapons and Rep. LaTonya Johnson who helped mandatory minimums for felons with guns become law, the measure would mandate a special tax on all gun and ammunition sales in the state then use those proceeds to fund controversial buyback initiatives.

“The political will exhibited in Australia led to a palpable shift in public opinion,” wrote Sargent, who is also seeking to repeal state preemption law, in an op-ed for the Cap Times last December. “The people accepted the fact that safety had to take precedent over the ability to own an assault rifle. This is the shift in thinking we must seek in our own country.”

Her legislation, Assembly Bill 960, would set up a two-year trial program through the Wisconsin Department of Justice that would require lawful firearms dealers in the state to pay a special 20 percent tax over and above any current sales tax on every sale of a gun or ammunition. This would require each seller to register under the program under penalty of law for non-compliance.

The monies would then be issued to gun control organs and law enforcement agencies in the state to conduct gun buyback programs requiring that any firearms recovered be destroyed or, if historical, be transferred to the state for preservation. The programs would issue gift cards or certificates that could not be used for future gun or ammo purchases and a report on all weapons would be submitted to DOJ.

“Until we are ready to address the culture of guns in America, we will continue to see tragedy after tragedy on the evening news,” said Sargent. “That is something we simply cannot accept as inevitable.”

A yearlong effort by Boston Police in 2015 turned up only one gun.

Gun rights advocates disagreed with the Wisconsin scheme as placing a questionable tax on a Constitutional right.

“This is using the axiom the power to tax is the power to destroy. Which is the goal of the gun prohibition lobby,” Alan Gottlieb, founder of the Second Amendment Foundation, told Guns.com.

“We all know that criminals and terrorists don’t give up their weapons at gun buy backs,” he said. “So the firearms and the people this is aimed at not are not the problem. Is it any wonder that the people have lost respect for politicians who offer false solutions to our nation’s problems?”