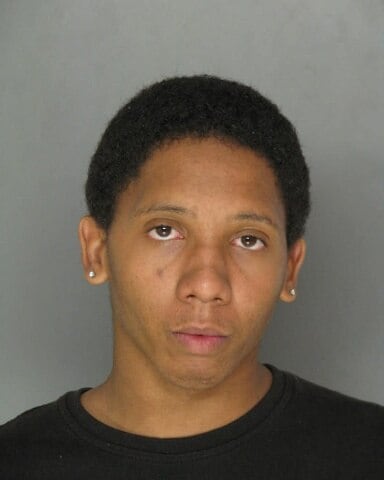 Bristo, shown after being charged in a 2012 shooting, could be facing life in prison for his role in alleged violations of federal gun laws and witness tampering. (Photo: Allegheny County Jail via WTAE.com)

Indicted are Joshua Bristo, 23, Richard Van Holt, Jr., 27, and James Pamplin, Jr., 21, on charges that range from conspiracy and witness tampering to possession of a firearm by a felon.

As detailed in court documents, between January and June 2015, the group used three different straw buyers to purchase at least 12 firearms over the counter from federal firearms license holders. The buyers, unidentified in the superseding indictment, were coerced under the threat of physical force to lie on firearms transaction paperwork.

One of the straw buyers, a female who purchased six pistols for the ring, was later allegedly threatened by Bistro who pointed a handgun at her and threatened to kill her if she ever spoke of her role to law enforcement.

Agents from the Bureau of Alcohol, Tobacco, Firearms and Explosives as well as investigators from the Clairton and North Versailles Police Departments conducted the investigation leading to the indictment.

“Individuals who illegally sell guns end up arming violent criminals, who time and again pull the trigger on our streets and put the public’s safety at risk,” said ATF Special Agent in Charge Sam Rabadi in a statement released Thursday. “ATF will continue to shutdown illegal gun running networks and put the traffickers behind bars to make our homes, streets, and communities a lot safer and more peaceful.”

Besides the straw purchases, the men allegedly robbed a victim last October of another four firearms.

The guns acquired listed in the indictment included five Glocks, all in different models and calibers; three Smith & Wesson SD40VEs; a Smith & Wesson SD9VE; an FNH FNP .45; a Springfield XD .40 and two Taurus semi-autos. The court ordered all forfeited to the government if recovered.

If convicted of all charges and given the maximum penalty, Bristo could receive life in prison and a $1 million fine. Van Holt and Pamplin could each get up to 15 years and a $500,000 fine.

Bristo, then 20, made headlines in 2012 for his role in a shooting fueled by neighborhood rivalry that left one person critically injured and ended in a dramatic police pursuit.

An arraignment hearing is set for March 8 at the Pittsburgh federal courthouse in front of U.S. Magistrate Judge Lisa Pupo Lenihan.