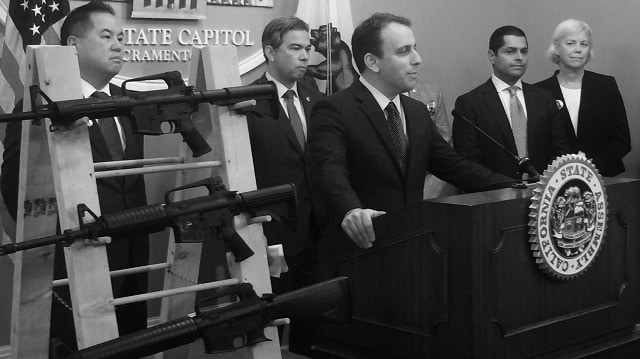 This comes at a time when record numbers of background checks are being processed across the nation as many Americans look to purchase firearms and obtain concealed carry permits amid growing media attention to mass shootings and gun violence, and the political responses to those issues.

In January, Democratic Assemblymember Marc Levine introduced a bill to “close a loophole in law that allows the gun industry to evade the assault weapons ban in California.”

According to the release, California state law prohibits the use of firearms with magazines that are detachable by hand, in order to prevent shooters from being able to quickly reload and inflict more damage. However, “bullet buttons” exploit this provision of the state’s law, the release argued.

“Killing machines have no place on our streets and gun violence must not be tolerated. This legislation closes a loophole in law that allows military-style assault rifles to be sold legally in California. We raise our children in communities, not war zones,” Levine said.

California law already limits the purchase of handguns to one per month. Santiago’s measure — AB1674 — would “create parity” in state law and apply the same restriction to all gun categories, including handguns, rifles, shotguns and “the semi-automatic versions” of those firearms, according to a release.

“There are over 300 million guns in the United States. That’s more than one gun for every man, woman, and child,” Santiago said in the release. He pointed to one transaction in April of 2014 that resulted in the sale of 177 firearms to one person. “As a father, these statistics are terrifying. As a legislator, I am in a position to do something about it,” he said.

However, Gun Owners of California has argued that the measures would not be effective, and they violate the Second Amendment, according to Capital Public Radio.

“We should be banning Porsches. Far more people die driving Porsches than they do with semi-automatic firearms that these folks are trying to ban,” said Sam Paredes, with the organization. He said the goal of the measures was to “ban the private possession of firearms,” which he said would never happen.

Earlier this year, WalletHub reported on which states were most dependent on the firearms industry. California ranked 46th in the nation.