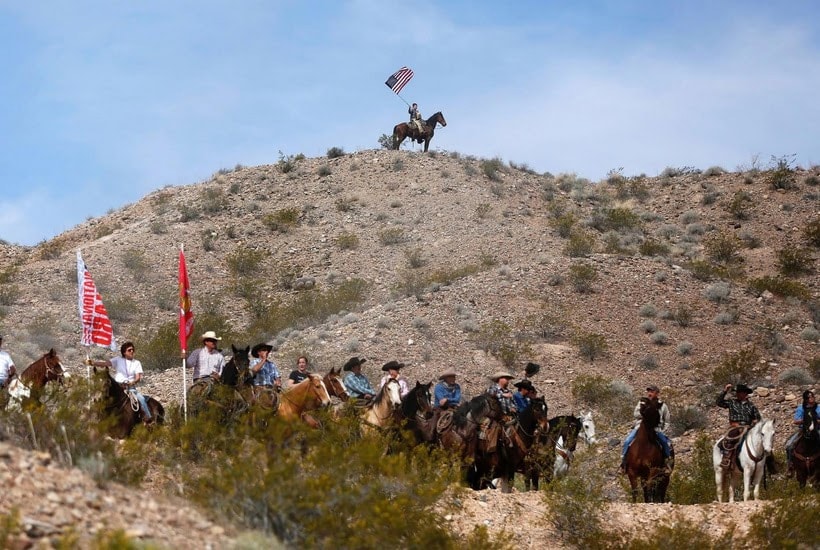 Federal authorities attempted to seize some 1,000 head of cattle belonging to the Bundy family in 2014, but eventually backed off, citing safety concerns. (Photo: Jim Urquhart/Reuters)

Last week, a federal grand jury indicted more than a dozen additional individuals who were involved in an April 2014 standoff with rancher Cliven Bundy against the Bureau of Land Management over grazing rights in Nevada, the Department of Justice announced in a press release Thursday.

Bundy was arrested in February for his part in the 2014 armed protest, accused of the same crimes as two of his adult sons – Ammon and Ryan Bundy – who were arrested after a separate, yet similar, protest at a wildlife refuge in Burns, Oregon. That protest came to a not-so-peaceful end last month after 41 days. About two weeks before the last Oregon occupiers turned themselves over to authorities, protester LaVoy Finicum was shot and killed by law enforcement officers attempting to execute a warrant for Finicum and several other protesters.

In reference to the arrests related to the 2014 standoff, Attorney General Loretta Lynch said the Justice Department is committed to protecting the American people and defending the rule of law.

“We will not tolerate the use of threats or force against federal agents who are doing their jobs,” Lynch said. “We will continue to protect public land on behalf of the American people, uphold federal law, and ensure that those who employ violence to express their grievances with the government will be apprehended and held accountable for their crimes.”

Likewise, FBI Director James B.Comey, said, “Our democracy provides lawful ways individuals can respond if they disagree with their government, but if you resort to violence or threats, you will be held accountable under the law.”

Those indicted for the 2014 standoff now face federal charges for conspiracy to commit an offense against the United States and conspiracy to impede or injure a federal officer, using and carrying a firearm in relation to a crime of violence, assault on a federal officer, threatening a federal law enforcement officer, obstruction of the due administration of justice, interference with interstate commerce by extortion and interstate travel in aid of extortion.

The indictment named the following individuals, several of whom were already in custody following the Oregon standoff.

If convicted, each charge carries a maximum $250,000 fine, with prison terms ranging from a mandatory five years to a maximum of 20 years. Additionally, the indictment holds five counts of criminal forfeiture, which would require forfeiture to the federal government of property with a value of at least $3 million, as well as surrender of all firearms and ammunition possessed during the 2014 standoff.

Carol Bundy, wife of Cliven Bundy, said in an interview with Newsmax that those involved in the 2014 standoff embarrassed the federal government, which is now retaliating and attempting to “show us who’s boss.”

Carol said that they are raising their cattle on the same property and in the same way the family has for generations before them. The Bundy family argues that the land on which they graze their cattle is public land, owned by the American people. The family believes they have the right to be there, uninhibited, while the federal government has determined the family is essentially trespassing on government property, for which they must pay fees and purchase permits in order to use legally.