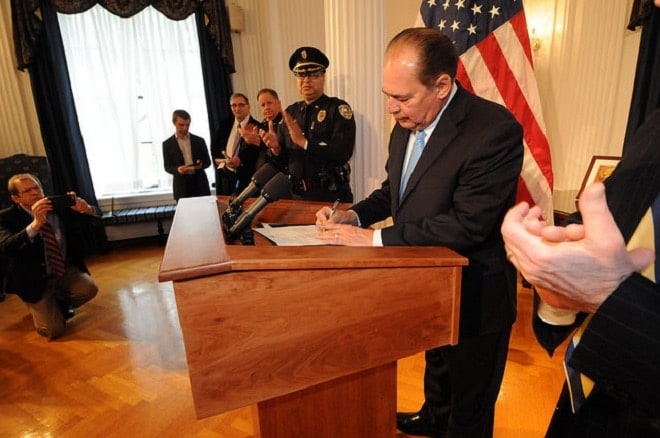 Within 48 hours of Gov. Tomblin torpedoing a bill to allow concealed carry without a permit in the state, lawmakers passed it into law regardless. (Photo: governor.wv.gov)

In the first two days after West Virginia Gov. Earl Ray Tomblin’s repeat veto of a constitutional carry bill, the legislature voted to approve it without his signature.

Tomblin rejected the measure, surrounded by police officers last Thursday, citing concerns over the safety of law enforcement. This led to the House of Delegates voting 64-33 the next morning to pass the proposal over his veto and the state Senate voting 23-11 to do the same on Saturday. With legislative action complete on the bill, it will become the law of the land effective in 90 days.

Afterwards, Tomblin released a statement painting the new law as being anti-police.

“West Virginia’s law enforcement officers have dedicated their lives to keeping us safe and helping us in times of need, and it’s disheartening that the members of the Legislature have chosen not to stand with these brave men and women – putting their safety and the safety of West Virginians at risk,” said Tomblin. “It’s unfortunate that the concerns of officers from every law enforcement branch in the state, including the West Virginia State Police and university campus police officers, have been ignored by today’s action.”

The new law, which passed as House Bill 4145, will allow those 21 and older who are legally able to possess a firearm under state and federal law to carry one concealed in the state without first having to obtain a permit.

Under its guidelines, the current licensing scheme will remain in place for those who want a permit for the sake of taking advantage of its extensive reciprocity recognition in other states, but one will not be a requirement to carry in the state. The new law allows for a $50 tax credit to offset training costs.

Further, those between the ages of 18-21 would be able to apply for a permit, which was previously prohibited.

State Attorney General Patrick Morrisey downplayed the Governor’s public safety argument, saying, “As the chief legal officer of the state and the person in charge of criminal matters for the state at the WV Supreme Court and in federal courts, I know that this legislation will not impact public safety. If this bill is enacted, we will not only expand freedom, but we will keep our citizens protected.”

Backing up Tomblin over the weekend were national gun control groups who fought the change at every turn for the past two years, successfully encouraging his veto both in 2015 and last week.

“As a mom and a West Virginian, I am livid that the legislature caved to the demands of the gun lobby on HB 4145,” said Dee Price with the West Virgina chapter of Moms Demand Action in a statement emailed to Guns.com.

New York Mayor Michael Bloomberg’s Everytown group who, as noted by the Associated Press, have invested “in the six-figure range” to blitz the issue in ads statewide, also funded a survey citing more than two-thirds of concealed carry permit holders favor requiring permits to carry a concealed handgun in public in the state.

“Law enforcement, our governor and 84 percent of West Virginians oppose allowing people to carry hidden, loaded firearms in public without a background check, safety training or a permit because it is just plain dangerous,” said Price. “This November, we will remember this craven effort to curry favor with the gun lobby at the expense of public safety.”

As for the gun lobby, Second Amendment Foundation’s Alan Gottlieb told Guns.com on Sunday that New York ad campaigns have trouble on the ground in states like West Virginia.

“This is a big win,” said Gottlieb. “Not just for gun rights but for the freedom movement in the battle against billionaire elitist gun prohibitionists like Michael Bloomberg. West Virginia just told him he can’t buy away our Second Amendment rights.”

The National Rifle Association, who mobilized support to help introduce legislation early enough during the session to allow for an almost inevitable veto showdown, argued it all boils down to the right to bear arms.

“Self-defense is a fundamental right that must be respected,” said Chris W. Cox, NRA-ILA executive director in a statement sent to Guns.com. “Law-abiding West Virginians are now free to choose the method of self-defense that best suits their needs. The NRA and our five million members are pleased that the legislature voted in support of West Virginians’ Second Amendment freedoms.”