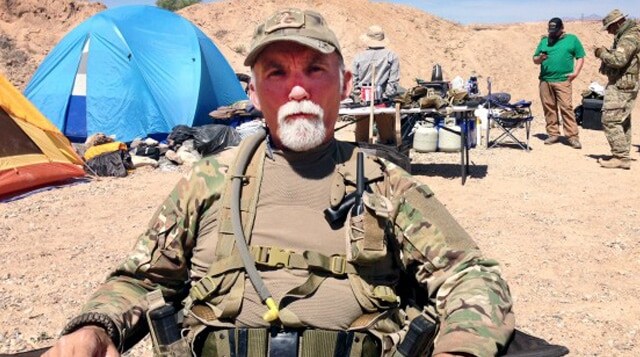 A New Hampshire man who co-chairs Veterans for Trump was arrested last week for his role in a standoff between a Nevada rancher and federal officers in 2014.

Gerald “Jerry” DeLemus, of Rochester, New Hampshire, was indicted along with 13 others who traveled from across the country to support Cliven Bundy in Bunkerville, Nevada, and the rancher’s longtime dispute with the federal government, according to the indictment.

DeLemus was a “mid-level leader and organizer of the conspiracy,” the indictment says. His duties included recruiting, organizing, training and providing logistical support to gunmen, and he also led armed patrols and security checkpoints.

The Bundy standoff happened in April 2014 when agents with the Bureau of Land Management rounded up the rancher’s cattle as they grazed on federal land because Bundy failed to pay more than $1 million in grazing fees.

DeLemus contacted Bundy on April 8, 2014, and traveled two days later with firearms “with the intent to commit the crimes,” the indictment says. By April 12 and until May 2014, he had been establishing efforts to deter law enforcement actions, including recovering extorted cattle.

Bundy was arrested for the incident last month along with a group that included two of his sons were arrested for occupying a federal building on a wildlife preserve in Oregon.

DeLemus was named alongside three state lawmakers as chairmen to Veterans for Trump, a New Hampshire group supporting businessman Donald Trump’s run for president. Trump’s campaign announced formation of the group in July 2015, shortly after the real estate mogul received heavy criticism for saying Sen. John McCain is “not a war hero.” It’s unclear how the veterans group has participated in Trump’s campaign since it was originally announced.

DeLemus’s wife, state Rep. Susan DeLemus, a Republican from Rochester, has been rallying support for him since the arrest. She hosted an event Monday and launched a website to share his story and raise money for a defense fund.

“He is honest, and trustworthy, and true blue, a true patriot and a man of law,” she told The Boston Herald about her husband. “He is a law-abiding citizen and an American role model.”