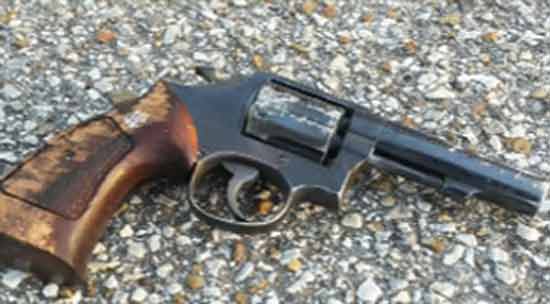 Police recovered a revolver about a block from where the attempted robbery occurred. (Photo: Fox 13)

A 16-year-old boy is dead from a gunshot wound, but police believe he sustained that injury while attempting to a rob a couple in East Memphis early Wednesday morning.

Local news station WREG reported the couple was sitting in their car outside of a home around 1:30 a.m. when they were approached by three males, all armed with handguns. The suspects apparently announced a robbery before shooting inside the car, striking the 27-year-old male in the side.

The male victim, however, was armed with a gun of his own and returned fire, striking one of the suspects. Once the victim returned fire, all three suspects immediately fled from the scene.

The male victim later told police he was unsure if he shot any of the suspects or not, but soon after the robbery, a teen boy showed up at a local hospital suffering from a gunshot wound to the chest. The teen, whose name has not been released, was transferred to another hospital via helicopter, but succumbed to his injuries and died.

Investigators later learned after the robbery attempt and subsequent shooting, the two suspects dropped the injured teen off at his mother’s house and she brought him to the emergency room.

The victim was also taken to the hospital to receive treatment for the gunshot wound he sustained during the firefight. He is expected to recover.

There were no reports of the female victim being injured.

A local Fox affiliate reported that as the suspects fled from the scene, they tossed a gun out of the window of their getaway car. Police later recovered that gun, which has led to a bit of a mystery. Apparently the revolver, which was loaded with six rounds, had the inscription “SAPD” on it, but the San Antonio Police Department confirmed that no such gun was missing.

Authorities are still searching for the remaining two suspects, but have little to go on at this time. Major Rodney Adair with the Memphis Police Department said the suspects were believed to be wearing dark-colored hoodies, but the victims didn’t get a good look at them because the suspects were “pretty much scrambling for their lives.”

According to a report from local media, the East Memphis area has so far this year seen an unsettling 225 percent increase in crime from last year.