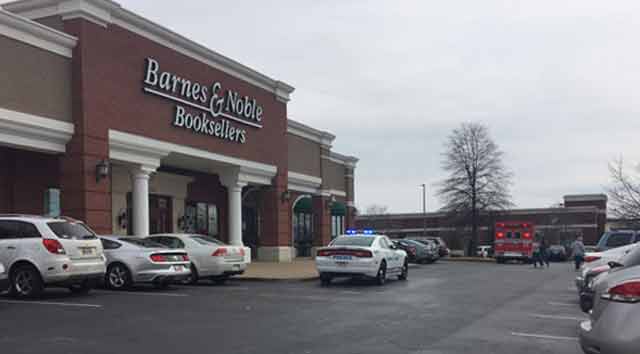 Some say the area where the incident occurred is rather safe, while other residents say they won’t go there after mid-morning. (Photo: Action News 5)

Two men are facing charges after an incident at the Wolfchase Galleria shopping center in Memphis Monday. One is accused of shoplifting and other crimes, while the second man is accused of shooting at the suspect as he fled from the scene.

Police say Nathan Williams, 23, stole merchandise from City Gear, a clothing and shoe store, then attempted to make his escape through the parking lot. But customer Christopher Jones witnessed the fiasco and chased after him.

Jones, who was carrying a concealed handgun at the time, fired a shot into the ground in the parking lot, in an apparent effort to scare Williams, according to reports from a local NBC affiliate But Williams, unscathed by the warning shot, just kept running.

In fact, Williams ran across the highway and attempted to steal two separate vehicles, but was unsuccessful. At some point, still attempting to make his escape, Williams grabbed on to a moving SUV to hitch a ride, but soon fell off. Two paramedics witnessed the escape attempt and failure.

Williams attempted to hitch a ride in the ambulance as well, but when the emergency workers refused, citing that the vehicle was for emergency purposes only, Williams stole the key from the ignition. He then again tried to run away, but was soon thereafter tackled by the paramedics and held until police arrived on the scene.

Williams was arrested and is faced with charges for criminal attempt, burglary of a motor vehicle and vandalism under $500. Likewise, Jones was also arrested and charged with reckless endangerment and unlawful possession of a weapon. It is unknown if Jones had a valid handgun carry permit.

No one was injured by the gunfire.

Local residents told reporters that crime is become all too common in the area.

“I hear about stuff up here all the time like that,” said resident Kellie Apperson.

Apperson added that if she needs to go to the mall, she makes sure her trips are in the mornings.

Apperson said it’s sad to see the area go downhill like it has, and resident Scott Cummings agrees, but also believes more people need to be armed in order to protect themselves from violent crime.

“Unfortunately, the police can’t do everything,” Cummings said, “and it continues to get worse.”