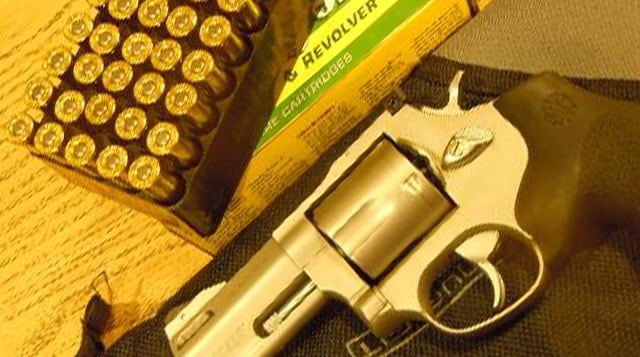 A Taurus Tracker revolver next to a box of Remington .41 Magnum ammunition. (Photo: ArmsList)

A $75,000 personal injury lawsuit was filed on leap day in a Michigan federal court against Taurus International and Remington Arms.

William Fear, of Brighton, Michigan, says his Taurus Tracker revolver loaded with Remington-brand .41 Magnum ammunition blew up in his hands in September 2013, according to the complaint filed Feb. 29. The lawsuit alleges neither the gun nor ammo met industry standards when they entered commerce.

The explosion caused Fear to suffer serious and permanent injuries to his hands and other parts of his body, the lawsuit says. He has now “become sore and sick and lame and disabled.”

However, after reviewing the complaint, the court issued an order that Fear “show cause” or it will dismiss the case on March 15. The order raises issues over jurisdiction, specifically the states where the defendants reside.

Both Taurus and Remington are seasoned defendants in personal injury suits, but neither the Taurus Tracker nor Remington .41 Magnum ammunition have been subjected to recent lawsuits or recalls.

The Miami gun company settled a more than $30 million class action suit last year in which the plaintiffs identified a defect with the safety mechanism in nine models of Taurus pistols. The case is expected to wind down in July after the parties involved finish negotiating terms of a recall.

Remington, headquartered in Madison, North Carolina, has been in and out of the courtroom for decades fighting dozens of cases over a defective trigger in the iconic Remington 700 rifle. In 2014, the company settled a multi-million dollar class action suit that could result in the recall of nearly 7 million rifles. A preliminary settlement agreement was approved by a judge, but final details are still being negotiated.