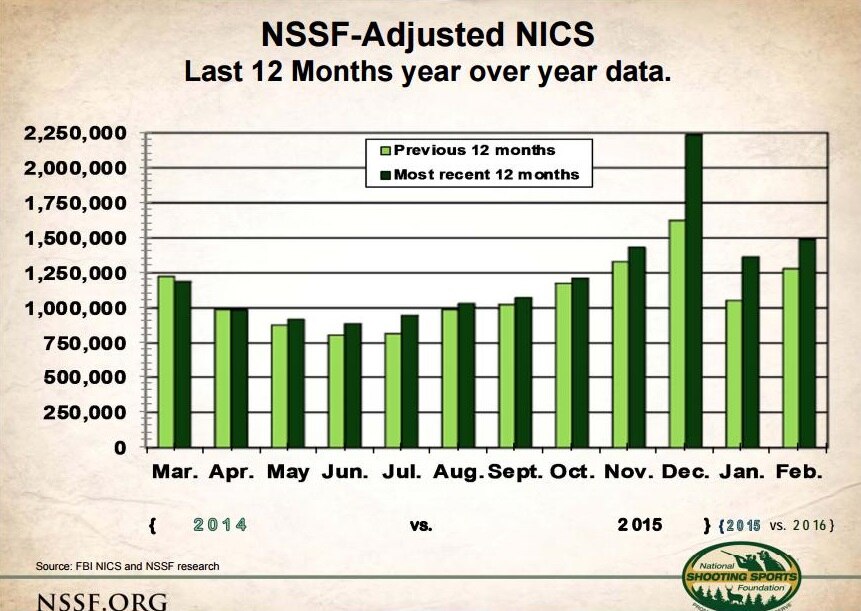 The NSSF’s graph comparing the background checks performed each month for the past two years.

While official NICS numbers for February show about 2.6 million background checks were processed for firearms transfers, the NSSF revised numbers indicate the real number is closer to 1.5 million — a 16 percent increase over last February’s nearly 1.3 million.

But the NSSF are careful to point out that while their statistics provide information on the number of background checks initiated by NICS for firearms transfers, those numbers don’t necessarily correlate to overall firearm sales numbers.

“Based on varying state laws, local market conditions and purchase scenarios, a one-to-one correlation cannot be made between a firearm background check and a firearm sale,” the group said.

For example, in many places private firearms transfers don’t require a background check to be processed before the sale is completed if the seller is not in the business of dealing.

Last month, the NSSF revised numbers indicated a decline of more than a million when they removed background checks related to concealed carry permits from consideration. January’s revised numbers showed about 1.4 million people were interested in buying a firearm from a federally licensed dealer last month.

However, even as the numbers of background checks for firearms transfers continue to climb nationwide, the ATF’s most recent firearm production numbers show a dip in manufacturing in 2014 from the previous year.

But the numbers for 2014 are also still higher than the production figures for 2012, which were about three times as high as in 2000.