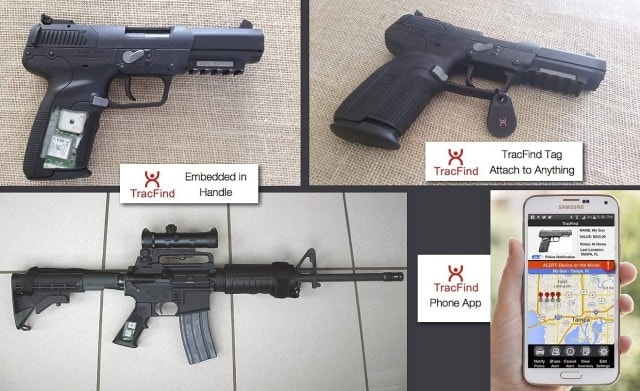 “TracFind is a device for smart owners of ‘dumb’ guns who want to protect their loved ones and prevent firearm tragedies,” says company founder. (Photo: TBO.com)

A Florida business is developing a small GPS device coupled to a smart phone app that can track lost or stolen guns to within three feet and let a gun owner know when their piece is on the move.

TracFind of Clearwater has developed a coin-sized tacking device that can be put in or on just about anything ranging from a laptop to a yacht to the hand grip of an AR-15. Capable of holding a three-year charge, the rechargeable tracker works off cell phone towers so if you are in a poor signal area you may just be spinning your wheels.

However, users can set the device to notify them immediately through a smart phone app if the object it is attached to moved as little as one ince. Once in motion, the tracking can be handed over to law enforcement. Multiple devices can be used , for instance one at the gun safe level, another at the gun case level, and a third or even a fourth on the gun itself if the owner is feeling froggy.

One bonus feature: the application can keep a historical record of everywhere the tracker has logged in from and provide a date/time/location stamp.

“Most gun owners won’t use ‘smart gun’ technology due to the possibility that it may interfere with the gun’s function when needed, so we designed TracFind with that in mind,” Clark East, the company’s founder and CEO, told the Tampa Bay Tribune.

“TracFind is a device for smart owners of ‘dumb’ guns who want to protect their loved ones and prevent firearm tragedies,” he said.

East advises he plans on marketing the device and its app later this year.

We suggest they trial it on guns belonging to federal law enforcement officers as they seem to have issues as of late keeping tabs on their gatts.