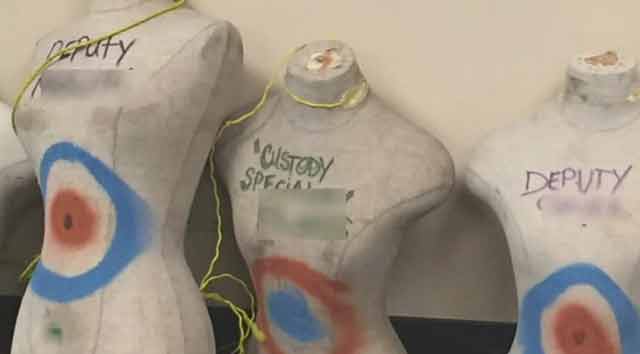 The discovery of more than half a dozen mannequins placed throughout Crestline, California, each one hanging form a rope and displayed with a bullseye and the name of a local deputy, has landed nearly 30 people in jail.

When the San Bernardino County Sheriff’s Department found the first mannequin, they laughed, but when they got reports of half a dozen more, the department took a serious look at where they came from.

An investigation revealed that the mannequins were the idea of Sarah Stewart, 36, but Erin Elder, 47, helped her set up the displays throughout the town. Both were arrested on suspicion of making criminal threats against an officer, but authorities said there may have been more people involved in the fiasco, which they believe was executed as a means of intimidation.

Additionally, according to Capt. Donald Mahoney, with the San Bernardino Sheriff’s Department, the duo have known ties to a white supremacist group and during the course of the investigation into the mannequins, another 27 people were arrested on other, unrelated charges.

Mahoney said authorities do not currently have reason to believe there is any actual threat to the safety of the officers named on the mannequins.