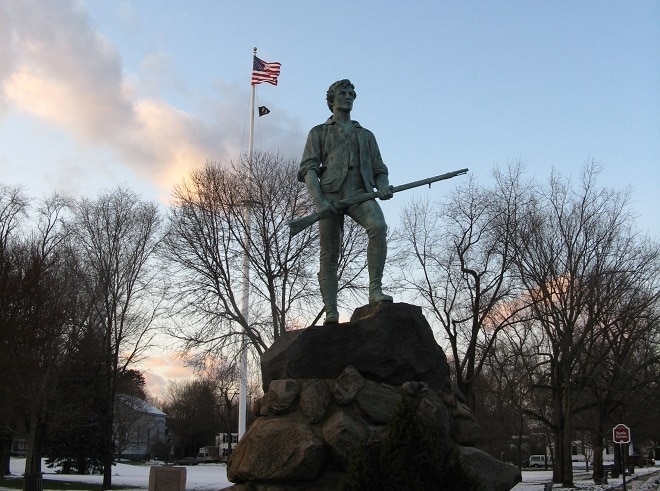 The monument to militia Captain John Parker in Lexington is a powerful symbol to those against a proposed local prohibition on guns deemed to be ‘assault weapons.’(Photo: Wikipedia)

Lexington, Massachusetts earned an enduring place in the quest for American freedom and residents on Tuesday hotly debated a plan requiring some to turn in their arms.

A citizen’s petition by resident and outspoken advocate Professor Robert Rotberg to ban certain sale, ownership or possession of some semi-automatic firearms and their associated magazines was discussed in front of the town’s Board of Selectmen on March 8.

Much as the town went down in history on April 15, 1775, for being the site where “The shot heard round the world” was fired by Minute Men against British redcoats, Rotberg feels the time and place is right to push for more gun control.

“Just as we fired the first shot to start the revolution, this might be the first shot – no pun intended – to start a movement against assault weapons that would capture the state and therefore maybe explode to reach the country,” he told NPR last month.

Rotberg, who has written more than 20 scholarly works examining failed states and international affairs, was formerly the president emeritus of the World Peace Foundation and a program director at Harvard University’s John F. Kennedy School of Government. While serving for over four decades as a member of the 203-person Lexington Town Meeting, he failed in a 2014 bid for the Board of Selectmen.

However, his petition to put into effect a ban on the manufacture, sale, and possession of guns deems assault weapons in Lexington, under threat of a $1,000 fine with no provision to grandfather or allow a waiting period to take effect, has the city attorney worried.

“Although on its face an assault weapons ban would likely be permissible under the Second Amendment, the proposed bylaw would likely be disapproved by the [Massachusetts] Attorney General or by a court as preempted by the comprehensive Firearms Act,” warns a Feb. 4 letter from a law firm retained by the city to Selectmen released March 9.

“Beyond the strictly legal issues raised by the proposed bylaw, this suggested ban has already generated a large amount of attention from gun advocates,” the letter goes on to warn. “If passed and approved by the Attorney General, the bylaw is almost certain to generate significant litigation.”

Moreover, the attention mentioned by the city attorney was palpable this week as reported by the Boston Globe, who noted 150 Second Amendment advocates attended to go on the record with the Board.

“The birthplace of American liberty is not going to be its gravesite,” said Michael Barg. “This will accomplish nothing other than to glorify the proponents’ phony dogma and misinformed political ideals.”

Others invoked the town’s powerful iconography.

“Our town logo is Captain John Parker holding a rifle. A picture of that statue is used by gun rights groups all across the country. It’s very near and dear to my heart because it’s my constitutional right to own these firearms,” said Lexington resident Brian Linehan.

Both state groups, including the Gun Owners Action League of Massachusetts, as well as national gun rights organizations such as the National Rifle Association have come out strongly against Rotberg’s plan.

As for the Professor, who argues he based his proposed amendment to the city’s laws on that of Highland Park, the Chicago suburb that defended its ban all the way to the Supreme Court last year, he contends he is acting in the interest of public safety.

“We’re not taking anything away,’’ said Rotberg, “We’re strengthening the rights of Lexingtonians to be secure in their private houses and less fearful of people spraying bullets at them.’’

The Board is expected to take the matter back up in April.