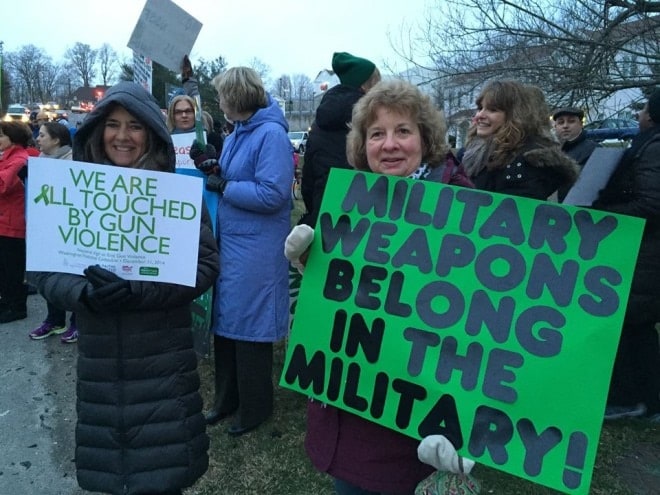 The Newtown Action Alliance has long advocated bans on AR-15s and similar rifles and are not feeling the Bern. (Photo: Facebook)

Following public debate by the Democratic presidential front-runners over the Newtown Bushmaster suit, an anti-gun group is calling out Bernie Sanders.

At the debate between Sanders and former Secretary of State Hillary Clinton on Sunday, the two took very different sides of an argument over how much the Protection of Lawful Commerce in Arms Act, which was designed to insulate the gun industry from frivolous lawsuits, actually shields gun makers in court. Clinton held the law, which Sanders voted for in 2005, removed “any accountability” for firearms makers and sellers, while Sanders offered that repealing the measure would end “gun manufacturing in America.”

While Second Amendment groups and the National Shooting Sports Foundation quickly weighed in on the remarks, praising the senator from Vermont while blasting Clinton for inaccuracies, others did the opposite.

“The NRA and Bernie Sanders could not be more wrong,” Po Murray, chair of the Newtown Action Alliance, told Guns.com via email Tuesday. “Repealing PLCAA would not end gun manufacturing in America. The gun industry had a vibrant manufacturing history before the PLCAA law was passed in 2005. It’s understandable why the NRA would take on such a position as it spent $12 million to secure the passage of the PLCAA law to protect gun industry profits but it’s insulting that Senator Sanders would subscribe to the same extremist views of the NRA.”

Murray’s group, while only recently formed, has painted themselves as an opponent to the industry as a whole.

The organization has backed federal bans on magazines capable of holding more than 10 rounds, protested free gun lock programs funded through a government grant due to its administration by the NSSF, pressured Jay Leno to pull out of a gig as emcee for the Shooting Hunting Outdoor Trade Show’s state of the industry dinner, and proposed turning all Newtown businesses into a gun free zone.

Murray contends guns such as the Bushmaster AR-15 variant used in the 2012 Sandy Hook shooting, whose marketing by the Remington subsidiary is at the heart of a suit by survivor families, should be tightly regulated.

“According to the ATF, there are over 300 million firearms in the U.S. We need to do more to de-militarize our nation,” Murray told Guns.com previously. “AR-15 style firearms, AK-47 style weapons and UZIs belong in war zones; not in Newtown, Santa Barbara, Chicago, Los Angeles or other cities and towns across America. More Americans have died from guns since the Sandy Hook shooting than service members in Iraq and Afghanistan wars combined.”

One way to achieve the group’s goals, feels Murray, is for Sanders to co-sponsor S. 2469 and support H.R. 4399, the Equal Access to Justice for Victims of Gun Violence Act, introduced by a number of vehemently pro-gun control Democrats, to repeal PLCAA.

“Senator Sanders should recognize the fact that the gun industry should not be selling these weapons of mass destruction to civilians,” she said.