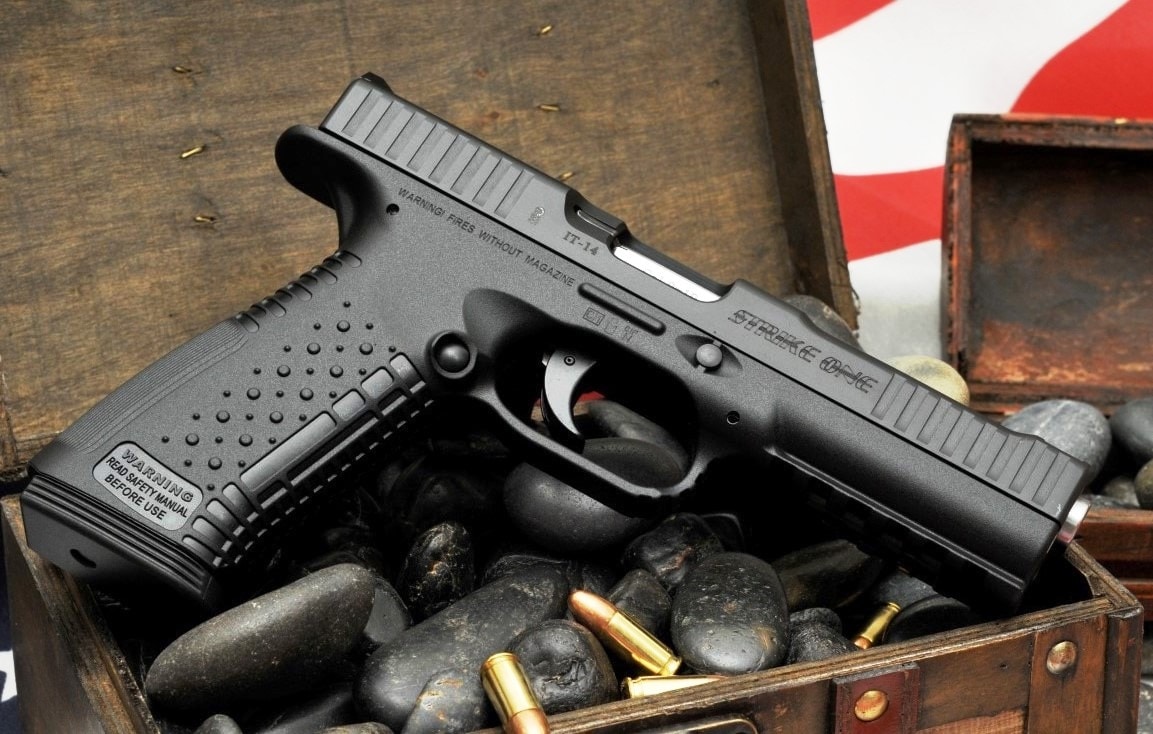 The Strike One in 9mm. (Photo: Sooner State Arsenal, LLC)

Sooner State Arsenal, the U.S. dealer of the Italian-made Strike One pistol by Arsenal, still has some 9mm models of the Strike One in stock. Sooner State issued that reminder in response to questions about availability of the guns in the coming year.

The Strike One is a polymer-lower, striker-fired handgun made in 9mm and .40. Some changes to what has become a routine design by many manufacturers have brought attention to the model, which was first introduced in 2012. Arsenal describes the gun as a finely-machined steel frame block and “in-line barrel” contributing to reduced recoil, better accuracy, and faster sequential shots than similar models.

Strike One is a sizable handgun, with a 5-inch barrel, a total height of 5.63 inches, width of 2 inches, and weight of 1.94 pounds. There’s a full-length accessory rail, molded “3-D” grips for traction, serrations fore and aft of the ejection port, and an ambi magazine release. It has a safe-action, drop-safe trigger as passive safety devices.

The cold-hammered barrel is Nitrite-treated, as are the patented locking block, slide and operating pin. Longer-than-usual rails provide torsion control of all moving parts. The locking mechanism ensures the barrel stays level throughout the shot cycle, shortening time between shots and enhancing accuracy.

In addition to frame/slide construction, Arsenal attributes the ease of rapid fire to a combination of the trigger, with its horizontal-only travel and short reset, and the “lightning-fast” locking mechanism. Fast reloads are facilitated by a 360-degree integral, beveled magazine well. Their YouTube video gives a more or less scientific demonstration of muzzle rise of the Strike One as compared to other mass-market handguns.

The Strike One is produced in several colors including black, olive drab, desert tan, marine blue with titanium slide, and black with titanium slide. Prices range from around $800 to $1,100. For a complete list of prices, check the company’s website.

Corrections from initial report on March 9, 2016: Sooner State Arsenal is a dealer, not a distributor. Also, International Firearm Corporation (IFC) is not affiliated with Century Arms.