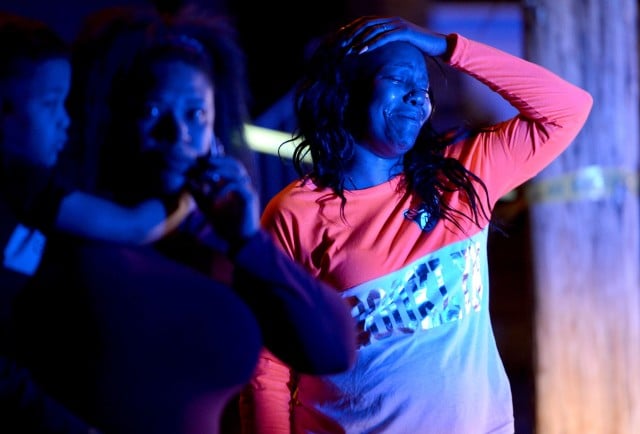 Law enforcement are on the lookout for what are believed to be two individuals who shot up a backyard get-together late Wednesday night. (Photo: Michael Henninger/Post-Gazette)

Authorities are reporting that five people are dead and three injured at a residential barbecue in the Wilkinsburg suburb near Pittsburgh late Wednesday night after two gunmen opened fire on a crowd.

Of those killed, most died at the scene and one succumbed to injures at an area hospital. WPIX is reporting that four women and one man were killed and officials are withholding their names at this time. A further two men are in critical condition while a woman is listed in stable condition at UPMC Mercy Hospital.

Police theorize at least two different weapons were used in the attack on 1304 Franklin Avenue due to various shell casings recovered at the scene. The first gunman is believed to have opened fire from the alleyway to the rear of the home into the crowd milling around the cookout around 11 p.m. When partygoers fled into the home to seek shelter, a second shooter opened fire from the side.

“It looks like right now they were all fleeing toward the backdoor of the residence when the second gunman fired from the side of the yard,” said Allegheny County police Lt. Schurman as reported by the Pittsburgh Post-Gazette. “They all seemed to get caught on the back porch.”

Neighbors described the scene as chaos.

“I heard about 30 gunshots, it was just a constant,” Jackie Johnson-Pendleton told KDKA. “When I came out, people were screaming and running and bodies were lying on the front porch. People’s lives taken like that at the drop of a hat, it’s just insane and it needs to stop.”

Though a motive is not known at this time, nor how the shooters obtained their weapons, national gun control groups were quick to issue statements in the aftermath of the violent attack calling for increased gun laws.

“I am heartbroken for the families whose loved ones were killed, and livid that five people were killed senselessly,” Elizabeth Pagel-Hogan with the Pennsylvania chapter of Moms Demand Action said in an email to Guns.com. “None of us should have to be afraid to have a barbecue on a warm spring night, or to go to school, church or the movies. Everyday, 91 Americans are killed by guns and hundreds more are injured. Congressional and Pennsylvania lawmakers can and should do more to combat gun violence.”

Anyone with knowledge of the event or the identities of the suspects involved is being urged to contact the Allegheny County Police Homicide Unit at (412) 473-1300.