DA: Use of lethal force against LeVoy Finicum justified and ‘necessary’ 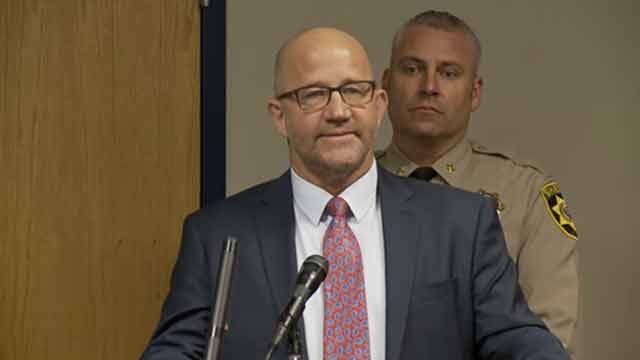 Officials investigating the officer-involved shooting that left Oregon protester LeVoy Finicum dead released new details surrounding the case this week, including the fact that the district attorney has deemed the shooting justified.

The deadly encounter occurred Jan. 26 as law enforcement officers from several jurisdictions attempted to arrest numerous protesters who had occupied the Malheur National Wildlife Refuge in Burns, Oregon, for over a month. Authorities focused on two vehicles which contained nine protesters and at least one other individual not directly involved with the occupation of the refuge.

As authorities initiated a traffic stop, occupier Ammon Bundy stopped his vehicle and those inside cooperated and complied with the commands they were given. Bundy, along with, Brian Cavalier and Mark McConnell were all apprehended without incident, Deschutes County Sheriff Shane Nelson said in a press conference Tuesday. 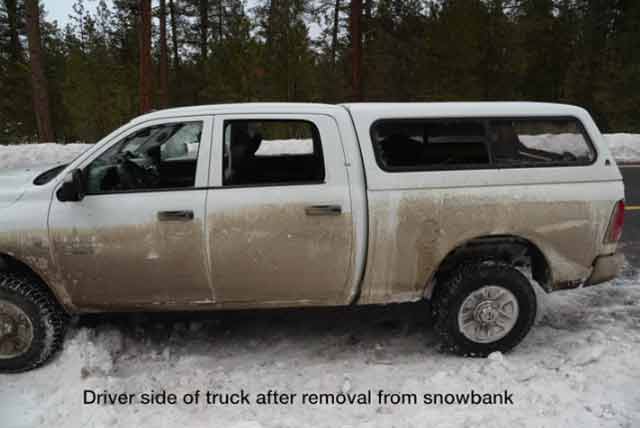 Authorities said despite reports the truck was peppered with “hundreds of bullets,” only eight shots were fired. (Photo: Deschutes Co. Sheriff’s Office)

Those in Finicum’s truck, however, did not cooperate or comply, Nelson noted. As a result, the Oregon State Police fired a non-lethal OC round at Finicum’s truck. At that point, Ryan Payne exited the vehicle and was subsequently placed into custody without further incident. It was then that Shawna Cox, who was also in the truck, turned on her video camera and began recording, a move which would later prove invaluable to the investigation.

After Payne got out of the truck, the remaining occupants, which included Finicum, Ryan Bundy, Shawna Cox and Victoria Sharp, stayed in the vehicle for several minutes before they made a collective decision to take off and essentially elude authorities, which is a felony in the state of Oregon.

Finicum traveled for about a mile and a half before he came around a bend where more law enforcement officers had set up a roadblock. As Finicum approached the roadblock, an officer can be seen stepping out into the middle of the road. Finicum narrowly missed him and swerved his truck, which subsequently was stuck in a snow embankment.

Authorities determined that Finicum was driving about 70 miles per hour when he came upon the roadblock and that as he rounded the bend, he had plenty of time and distance to slow his speed. Sheriff Nelson also confirmed the first three of the eight shots that were fired during the incident occurred as Finicum approached the roadblock. The first shot struck Finicum’s sideview mirror, the second and third shots both hit the front of his truck. None of those shots hit Finicum or any of the other individuals in his truck.

Malheur County District Attorney Dan Norris determined that those three shots were justified because “Mr. Finicum was using his truck as a dangerous weapon.”

“In this case, after interviewing the Oregon State Police trooper, that is, in fact, what he believed,” Norris added. “Under these circumstances, these three shots into Mr. Finicum’s truck
are justified.”

Two additional shots were fired by Hostage Rescue Team Operators with the Federal Bureau of Investigation. These shots originally went unreported and are now at the center of an independent investigation.

Once stuck in the embankment, Finicum immediately got out of his vehicle with his hands raised. Several times Finicum puts his hands down, toward his side, then lifts them again. Moments after exiting the vehicle, Finicum was shot three times, fell to the ground and was later pronounced dead at the scene. 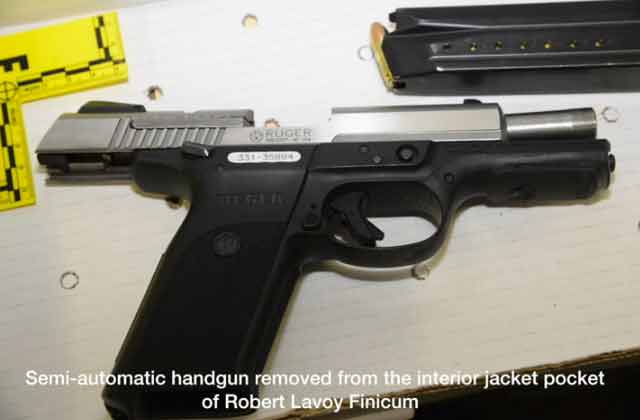 Authorities recovered a loaded 9mm pistol from Finicum’s pocket, which he was legally carrying at the time. (Photo: Deschutes County Sheriff’s Office)

Sheriff Nelson stated it was well-known by the law enforcement agents present that Finicum typically carried a handgun on his left side. According to Nelson, during the investigation authorities recovered a loaded 9mm, which was later confirmed to be a gift from a relative, from the front left interior pocket of Finicum’s jacket. Nelson noted that Finicum was shot after failing to get on the ground, as commanded several times, and reaching toward the area where the handgun was found.

Nelson also noted that one OSP Trooper, who was armed with a Taser, was approaching Finicum in an attempt to use non-lethal means to bring an end to the incident. According to Nelson, two other officers fired the fatal rounds and “shot Mr. Finicum because they believed he was reaching for a handgun and was about to use deadly force against them and or the trooper armed with the Taser.”

An autopsy revealed Finicum was shot three times in the back.

“We know without a doubt that the Oregon State Police troopers who shot Mr. Finicum did so as they moved to protect themselves and their fellow officers from imminent harm,” said Harney County District Attorney Tim Colahan. “Mr. Finicum repeatedly and knowingly made choices that put him, Robert Lavoy Finicum, in this situation. It was not the outcome that any of us wanted, but one he, alone, is responsible for.”

Eventually, the remaining occupants in Finicum’s truck were apprehended, but as officers were firing at Finicum, one of the bullets struck Ryan Bundy in the arm.

The shooting – and Finicum’s death – left many people with unanswered questions. Two days after the shooting, the FBI released a 26-minute aerial view video showing the moments leading up to Finicum’s death. The video, presumably recorded by the use of a drone, was captured from a rather long distance and was not of the best quality, leaving still some questions unanswered.

During Tuesday’s press conference, however, authorities released a second video taken by Shawna Cox from inside Finicum’s truck. The Deschutes County Sheriff’s Office synchronized Cox’s video with the previously released FBI video and went through them both frame by frame in an effort to explain the actions taken by law enforcement officers that day.