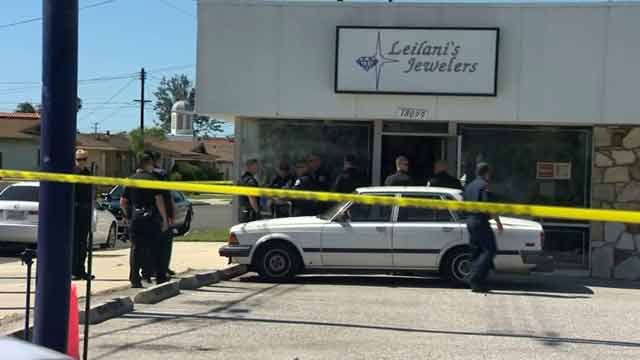 While Torrance is typically considered safe, this marks the second robbery in as many weeks. (Photo: KTLA)

A man died inside a Torrance, California, jewelry store after being shot by the store’s owner during what authorities say was an attempted robbery Tuesday.

The suspect entered Leilani’s Jewelers around noon, armed with a weapon and announced a robbery. But the 59-year-old shop owner refused to hand over any cash or valuables and instead opened fire on the suspect.

The suspect collapsed and the store owner immediately called 911. Police arrive on the scene, along with firefighters and paramedics. According to reports from KTLA, the paramedics rolled a gurney to the front of the store, but a short time later, wheeled it back to the ambulance empty.

The suspect, whose name has not been released, was pronounced dead at the scene. The shop owner was uninjured. No one else was in the store at the time of the robbery.

Torrance Police Department spokesman Sgt. Paul Kranke confirmed that a gun, believed to belong to the suspect, was recovered from the scene.

Those who know the store owner described him as friendly and well-liked.

“He’s a really nice guy, a nice soft-spoken guy,” said Garfield Estes, a friend of the owner. “But, push comes to shove, he’ll take care of himself.”

Police have not publicly identified the store owner, but his daughter, Leilani Tanino, told The Daily Breeze the man was her father, Tad Tanino.

Leilani said she learned of the robbery from a Facebook post and immediately contacted her father to see if he was okay.

He said, ‘I’m not hurt, but I’m not OK,’” Leinlani recalled. “He’s probably quite a bit shaken up. My heart was pounding out of my chest.”

She said her father has had the store there for over 30 years and while “Torrance is supposed to be a pretty good city,” she questions whether he should take his shop somewhere else.

Leinlani also pointed out the importance of being able to defend oneself.

“If he hadn’t had a gun to protect himself, God only knows what would have happened,” she said.