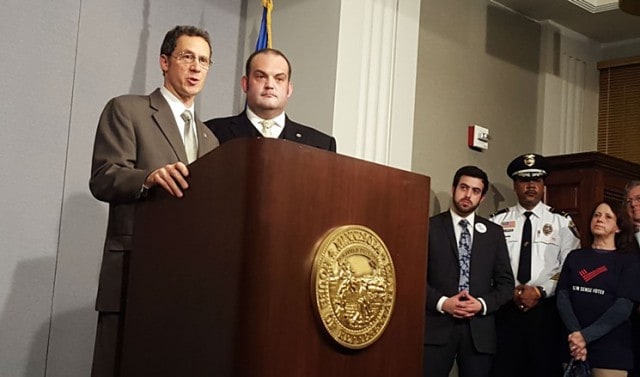 State Sen. Ron Latz and Rep. Dan Schoen, with the support of gun control groups, unveiled a measure to greatly expand background checks in the state. (Photo: City Pages via The Star Tribune)

At a press conference with gun control advocates in tow, Minnesota Dems on Thursday introduced a proposal to mandate background checks on most gun transfers.

“It’s unconscionable that right now in Minnesota, a domestic abuser, or anyone else who is legally prohibited from buying a firearm, can go online or to a gun show and get a gun with no background check, no questions asked,” said Latz, in a statement released through Moms Demand Action.

Latz’s bill, SF 2493, mirrored by Schoen’s HF 2897, would criminalize transfers between individuals who are not federally licensed firearms dealers. Exceptions would be in place for temporary loans of less than one day to prospective buyers, between family members, or as part of a marksmanship class. Firearms issued as part of a business such as for an armored car service or police duty would also be exempt.

First time violators would incur a gross misdemeanor, which under Minnesota law carries a penalty of up to one year in jail or a fine up to $3,000, or both. Subsequent offenses would be categorized as felonies with up to two years in jail.

Gun control advocates, reported as being front and center for Thursday’s press conference, feel the legislation would close existing loopholes in Minnesota law that make it easy for felons, domestic abusers and people suffering from mental illnesses to get guns.

“Minnesota moms are working hard across the state to mobilize support for background checks on all gun sales because the safety of our families and communities depends on it,” said Marit Brock with the Minnesota chapter of Moms Demand Action in a statement. “We have the momentum and are determined to make Minnesota safer. That starts with ensuring every gun sale in Minnesota requires a background check.”

Other national gun control groups have made it a point to set up camp in Minnesota, with former U.S. Rep. Gabby Giffords and her husband, former astronaut Capt. Mark Kelly,  forming a new group in the state just two weeks ago with expanded background checks as a primary goal.

Second Amendment groups feel the legislation is dead on arrival, citing universal background check proposals were debated extensively in the legislature in 2013 and led to the defeat of several vocal Democratic incumbents in the 2014 election cycle. Further, they warn it is a registration bill dressed up in the guise of public safety.

“Senator Latz and Representative Schoen have unveiled a gun control bill that is being portrayed as a comprehensive gun safety measure,” said Bryan Strawser, Minnesota Gun Owners Caucus & Political Action Committee executive director, in a statement. “In fact, this bill is nothing more than a gun owner registration bill, requiring law-abiding citizens to submit government paperwork for any purchase or transfer of a firearm.”

The legislation has been referred to their respective committees on Public Safety and Crime Prevention Policy and Finance. However, Rep. Tony Cornish, chair of the House committee, forecast a dim outlook on the version before him in coming days

“They just don’t have the votes,” said Cornish, R-Vernon Center, telling the Minneapolis Star-Tribune he does not intend to hear the background-check bill or any other gun control measures in his committee.