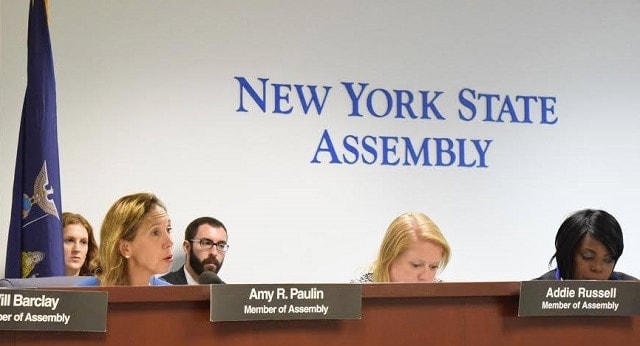 A New York State Democrat wants to close what she says is a loophole in gun sale laws that potentially allow suspected terrorists to buy firearms.

New York State Assemblywoman Amy Paulin has introduced A09433 — a bill that would extend the length of time the National Instant Criminal Background Check System has to process a background check if law enforcement agencies have any concerns about an individual.

Extending the time period  NICS is given to process a background check would be “the most effective and practical means to ensure that both legally prohibited persons and known and suspected terrorists cannot buy a firearm, rifle or shotgun in New York without impinging on the right of law-abiding individuals to do so,” Paulin told The Legislative Gazette.

Federal law gives NICS three days to process a background check to determine whether or not the individual interested in purchasing a gun is prohibited from doing so or not. Most background checks are processed near-instantaneously. However, due to insufficient information and other issues, some checks might take longer, and if the check is not processed within the time limit, dealers are allowed to continue with the transfer at their discretion.

Paulin’s measure would grant NICS an additional seven days to gather records from state and local authorities before making their decision on whether or not to approve a firearms transfer in New York. The legislation is intended to cause no delay in a firearms transfer sought by someone with a clean background.

Although the Government Accountability Office indicated in 2010 that belonging to a terrorist organization did not prohibit persons from owning firearms or explosives under federal law, the FBI still checks the terrorist watch list against background check applications on the belief that someone on that list might be prohibited by other means.

According to text that accompanies the bill, because of the lack of a law prohibiting individuals on the terror watch list from obtaining firearms “more than 2,000 guns were purchased” since 2004 by those on the list.

In about 9 percent of NICS checks in 2014, a “delayed” response was issued because of a possible match to the terror watch list but no “known prohibitor” was found within the processing limit, according to the bill.

Because of federal law, the FBI is not allowed to reveal that the potential purchaser is on the watch list, according to the bill text.

And according to the FBI, between 2010 and 2014 more than 15,000 gun sales to prohibited individuals went forward because the determination of whether or not to proceed with the sale could not be made within the three day limit.

However, Second Amendment groups and firearms industry lobbyists have argued against raising the upper limit for processing background checks. According to them, limiting investigations to three days not only encourages the system to be more efficient, but also preserves the Due Process rights of Americans.

This move also comes at a time that NICS is overwhelmed by record high numbers of background checks needing to be performed for firearms transfers.

One of President Barack Obama’s executive orders announced in January intended to address gun violence would call for the hiring of 230 additional appeals investigators to address the backlog and allow the system to operate more thoroughly.

No action has been taken on Paulin’s legislation, and there is no Senate companion.