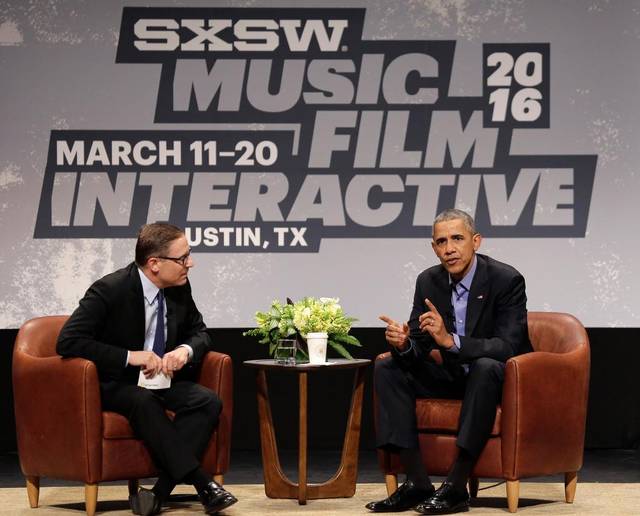 President Obama made the first ever appearance by the nation’s chief executive at the South by Southwest festival this week, though not without some controversy stirred in part by gun control groups. (Photo: Eric Gay/AP)

For the third year in a row, the open carry group intended to hand out flyers while armed near the annual South by Southwest festival in Austin this week. Then after news that President Obama would attend the festival on Friday, skipping former First Lady Nancy Reagan’s funeral, Open Carry Texas President CJ Grisham noted on Facebook that he still intended to hold his group’s event while armed and posted, “I just found out Obama is going to SXSW. This may get interesting.”

A commenter who replied, ““If you get a clear shot, please fire for effect,” followed this up.

The remarks, picked up by Buzzfeed on Thursday and repeated by other media outlets, prompted national gun control groups including the Coalition to Stop Gun Violence and Moms Demand Action to chastise OCT and Grisham online.

“There should be no tolerance for jokes about shooting the President – especially here in Texas,” said Nicole Green with the Texas chapter of Moms Demand Action in a statement to Guns.com. “Open carry endangers public safety – there is simply no way to know whether someone armed with a rifle is an activist making a statement or a reason to duck and cover. And it ties law enforcement’s hands from doing anything about it — until shots are fired and it’s too late.”

MDA,  backed by former New York Mayor Michael Bloomberg, has been on point against open carry both in the state and nationally, pressuring retailers and restaurants to update their polices against the practice while attempting to block legislation to expand it. Texas, which always allowed the open carry of long arms and black powder pistols, last year moved to grant the carry of modern handguns by those with a concealed carry permit as well.

Grisham told Guns.com the comments that brought the backlash were taken out of context; that his was alluding to logistical issues and the ‘fire for effect’ remark came from left field, and that OCT would never tolerate any threats of violence.

“A comment was made in one of our private groups that not only violated our policies, but common decency and potentially laws,” Grisham told Guns.com Friday. “No one seems to know who the individual was as he had never posted before and no one seems to know him. While it would be speculation to suggest he was a plant, the comment was immediately deleted by moderators and the individual was banned.”

Further, Grisham stood by the fact his group’s event was long-planned and had nothing to do with the President.

“Open Carry Texas never planned any event near POTUS,” he said. “We have been open carrying at SXSW since 2014 and this year was no different except the President decided to attend on the same day as our event. Our event wasn’t even planned to be on the same side of the river where Obama was speaking. Once again Bloomberg’s drones resort to lying and distortion about law abiding gun owners to achieve their objectives.”

As for the open carry effort on Friday, Grisham advised it went off just as they have in the past – without issue. Well, almost.

“I confirmed tonight with Austin Police Department that there were no calls for service about our open carry activities today, but ‘several’ against the lone, bare-breasted protester who attempted to antagonize our event,” said Grisham.

It is SXSW, after all.