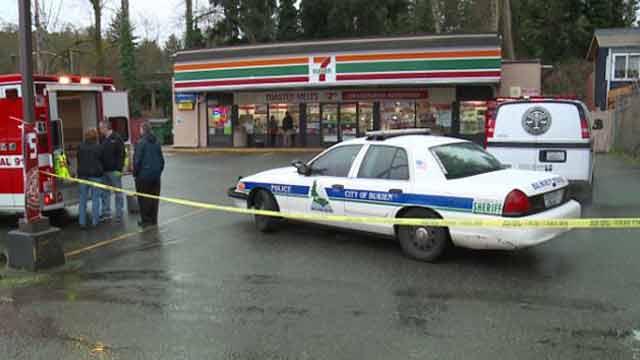 One clerk described the CPL-holding customer as a “really nice guy,” who has come into the store almost every morning for the last 12 years to buy a cup of coffee. (Photo: KCPQ)

Authorities in White Center, Washington, are crediting an armed citizen for saving the life of a 7-Eleven clerk who was attacked by a man with a hatchet early Sunday morning.

The customer and the clerk, both who have not been publicly identified, were the only ones in the convenience store when the suspect entered just before 6 a.m. The customer was sitting at a table near the counter, sipping a cup of coffee, when the masked assailant came in and started swinging at them both.

But as the suspect had his attentions toward the clerk, the customer pulled out a pistol and shot the assailant, striking him in the stomach and immediately stopping the attack, local media reported.

A short time later, first responders arrived on the scene and the suspect was pronounced dead. The clerk was taken to the hospital to receive treatment for injuries he received to his stomach during the attack. The customer was not reported to be injured.

King County Sheriff’s Sergeant Cindi West, said while the investigation is still underway, at this point it appears the customer not only acted appropriately, but saved a life, noting that the attack could have been significantly worse had he not been there to intervene.

“We believe had this Good Samaritan not acted, we might have a dead clerk on our hands right now,” West said, according to reports from KOMO News.

West confirmed the man has a valid concealed pistol license, but also said the man is shaken up over the incident.

Authorities believe the suspect, whose name has not been released either, may have intended to rob the store, but are not entirely sure because, according to the customer and the clerk, the suspect remained completely silent throughout the entire ordeal and never said a word.