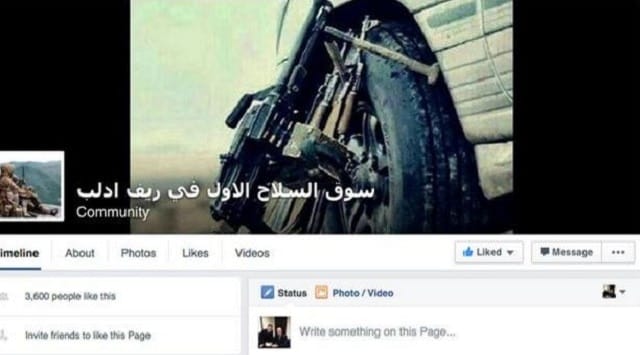 Recent reports from the Middle East, as well as the United Kingdom, indicate that Facebook is being used by arms dealers across the region to sell a wide range of weapons to rebel, terrorist and paramilitary groups.

The report first surfaced in late-February on Syrian News, which reported that arms dealers in Idlib, Syria, were running a Facebook page where it was possible to buy both weapons meant for U.S. military forces and Soviet-era grenade launchers.

The page was taken down by Facebook after The Mirror, a UK newspaper, picked up on the report.

According to The Mirror, Syrian rebels — including some with open ties to Al Qaeda-linked groups — have been using Facebook to buy and sell guns, ammo and “heavy weapons” to include Soviet-era, CIA-supplied rocket launchers.

One post offers an AGS-17 grenade launcher for $3,800, while another offers a TOW missile launcher — an anti-tank guided missile — supplied by “The US Pentagon.” Additional posts offer items like infrared cameras and even $67,000 MANPADS — missile launchers capable of bringing down aircraft.

However, while the initial page in question was taken down, a follow-up investigation by International Business Times UK revealed that there are several more similar pages that hail from the Middle East, ranging from categories like shopping/retail, outdoor gear/sporting goods, company, community and non-governmental organization. However, the page titles all clearly indicate in Arabic that the intentions for the pages are to buy, sell or trade firearms and other weapons and gear.

According to IBTimes, about 50 percent of the pages appear to hail from Egypt, while the rest appear geared toward people in Gaza, Libya, Iraq and Syria, and cater to groups from Kurdish rebels to ISIS fighters and Hamas members.

IBTimes UK indicated in their report that they were able to find the 11 groups and pages in question through a simple search on Facebook for the term “buy weapons” in Arabic.

Facebook has not released a statement with relation to the Middle Eastern arms dealing pages.

However, the social media giant recently updated its community standards policy with relation to firearm transfers on its site to prohibit the transfer of firearms by unlicensed dealers.

Several U.S.-based pages and community groups have been shut down or removed from the site as a result, and several other groups have sought out new forums to buy, sell, trade and discuss firearms and firearms accessories.

“We understand that some of these items may not be legally regulated everywhere people use Facebook. In order to enforce our policies as fairly and consistently as possible, we use one broad set of standards for the entire Facebook community,” Facebook’s help section states.

Additionally, page ads and sponsored posts are not allowed to “promote firearms, ammunition, paintball guns, bb guns, fireworks, explosives, pepper spray, knives, tasers, or weapons of any kind, including those used for self-defense,” and may not link directly or indirectly to pages where people can purchase these items. And ads for blogs or groups geared toward these interests are acceptable, “as long as the service does not lead to the sale of any weapons or explosives.”