Gov. Deal having second thoughts about campus carry bill on his desk 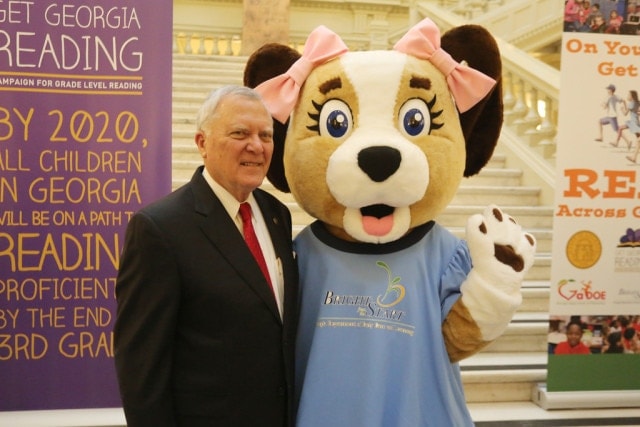 Deal, shown left at a K-12 literacy campaign earlier in the month, has concerns over guns in college day care centers and where under-18 youth may be attending events or classes. (Photo: georgia.gov)

The staunch pro-gun Republican is asking Georgia lawmakers for changes to a proposal allowing concealed carry at public college and universities in the state with just four days left in the session.

The bill has broad support from the GOP-controlled legislature, passing the House in a 113-59 vote last month and winning the Senate by 37-17 last week. Now, with the clock ticking, Gov. Nathan Deal is voicing concerns.

“As a lifetime defender and staunch supporter of Second Amendment rights, Gov. Deal has signed every pro-gun bill to reach his desk,” his office said in a statement released Monday. “However, he believes legitimate points have been made in regards to certain aspects of the ‘campus carry’ bill and he calls on the General Assembly to address these concerns in related legislation before Sine Die.”

The changes Deal is asking for concern day care centers as well as areas accessed by K-12 students who attend classes or events on university campuses. Further, he raised the issue of allow campus governing boards to set rules for gun free zones at disciplinary hearings and in administration and faculty offices.

“Addressing these issues is an important step in ensuring the safety and freedoms of students, faculty, and staff in our institutions of higher learning throughout our state,” Deal said.

Gun control groups, Democrats and some college professors have been urging Deal’s office to veto the measure, and it remains unclear if his statement to lawmakers is a shot across the bow that, should subsequent legislation not be rushed through to “fix” the current bill on his desk, he may refuse his signature.

GOP leaders have vowed to get to work on a solution.

“I certainly take any concerns Governor Deal raises seriously, but now that the bill is on his desk and with only four days remaining in the legislative session, time is of the essence,” said House Speaker David Ralston. “I am sure his team will forward specific recommendations to allow adequate time for consideration.”

Second Amendment advocates are critical of the reasons behind Deal’s apparent sudden change of heart on the legislation.

“Obviously we are disappointed in a governor who would be for a bill one week and then suddenly change his mind the following week,” Jerry Henry, executive director of Georgia Carry told Guns.com Tuesday. “One has to wonder if passing the bill was all show to give cover to some of the RINOs for their upcoming election. After all, the governor is a lame duck and does not have to worry about any more elections.”

Henry points to the fact that in Georgia’s 240-year history as a state, it never has been a crime to carry a gun in day care centers, and that through programs such as JROTC and 4-H, an estimated 200,000 high school aged youth across the Peach Tree State are involved in robust youth shooting events, Deal’s concerns just don’t hold water.

“As we all know, it is within the governor’s constitutional powers to veto any bill he sees fit,” Henry said. “Governor Deal has been rated A+ by the NRA for some 30 years or more. Now, one has to wonder about that rating. He sounds like a lot of other politicians in their ‘I support the Second Amendment, but…’ As we all know, there is no ‘but’ in the second amendment.”