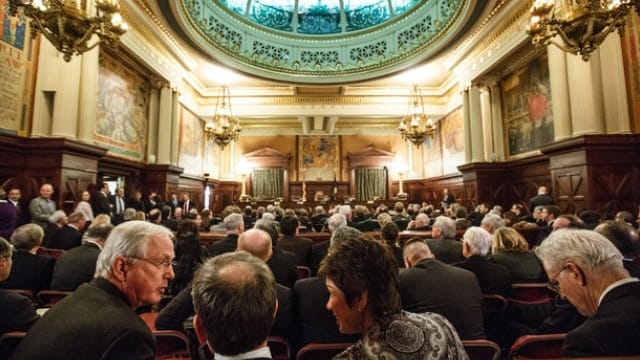 A 2014 law dubbed at the time the “strongest firearms preemption statute in the country” was debated in the Pennsylvania Supreme Court last week.

The controversial change to how courts in the state allow challenges to local firearms ordinances, Act 192, passed and was signed into law by then-Gov. Tom Corbett (R). Backed by gun rights groups, it  squeaked through the state legislature as an amendment to a metal theft bill.

As state Dems and gun control groups rallied to block the implementation of the new law and State Attorney Gen. Kathleen Kane announced she would not defend it, Second Amendment groups launched a volley of lawsuits under its protections against municipalities whose laws were brought under scrutiny

Repealed by the Commonwealth Court in a 7-0 ruling last June, Act 192 had its day in court last Wednesday.

Notably, instead of attacking the merits of the law itself, those seeking to dismantle it are questioning the mechanics of how it became adopted.

“This bill had two totally unrelated things thrown together on the last day of session, specifically to avoid the single-subject rule,” said state Sen. Daylin Leach, D-Philadelphia, who is a plaintiff in suit along with a four other assembly members and the mayors of Philadelphia, Pittsburgh and Lancaster. “It was so last-minute that the governor actually signed the wrong bill (at first).”

At least one of the six justices currently active seemed to agree.

“What does suing the city over a firearms matter have to do with the theft of copper wire?” asked Associate Justice David Wecht, a Pittsburgh area Democrat who won his campaign to an open seat to the bench in 2015.

Justices of the Pennsylvania Supreme Court serve 10 year elected terms. The court currently has five Democrats on the bench.

Attorney Nicholas Orloff, representing those with an interest in the preemption statute to include Republican lawmakers, argued that both unlawfully strict gun control ordinances and metal theft involve “the regulation of crime” and are therefore related.

A decision in the case is expected this summer.

Should the court strike the measure completely, it would be back to the drawing board for Republicans to pass a clean measure on the preemption statute change alone, which in the end would have to earn the signature of Gov. Thomas Wolf, a Democrat with an F-rating from the National Rifle Association who ousted Corbett in 2015. Wolf late last week linked the ambush shooting of a Pittsburgh area backyard cookout that left six dead to weak gun control measures although neither the shooters or how they obtained their guns are currently known.

Regardless of the outcome, Jonathan Goldstein, an attorney representing the NRA, told Philly.com the gun rights group would continue the fight.