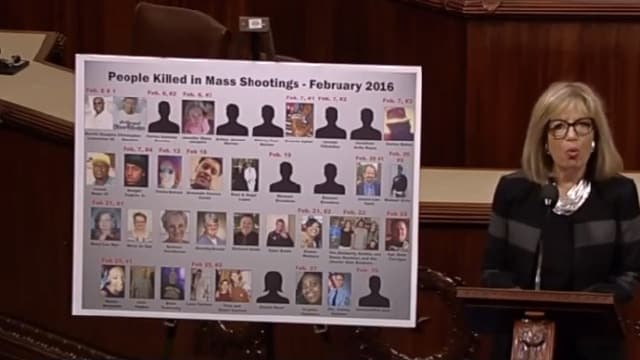 “Cheap foreign assault weapons are a favorite tool of cartels, mass shooters, and even ISIS, which used guns that had been imported to the United States to carry out the Paris attacks,” said U.S. Rep. Jackie Speier, D-San Francisco. (Photo: CSPAN)

Led by a California Democrat who has a memorial wall to gun violence victims outside her office, the bill would ban import of many types of semi-auto firearms.

The proposal, which uses the proposed Assault Weapons Ban of 2015 as its framework for deciding if a gun is importable or not, was introduced Tuesday on the House floor by U.S. Rep. Jackie Speier, a California Democrat who immediately garnered the support of 32 party colleagues.

“Cheap foreign assault weapons are a favorite tool of cartels, mass shooters, and even ISIS, which used guns that had been imported to the United States to carry out the Paris attacks,” Speier said during her monthly address to lawmakers and public remarks remembering the victims of gun violence.

“They give these individuals the power to kill and wound scores of victims in seconds, and that’s why the ATF has the power to ban them. Now we have to stop letting NRA lobbyists control what kinds of weapons come to our shores, and close this loophole before more people end up dead,” she said.

Speier, who was wounded during the Jonestown Massacre in 1978 while serving as an aide to Congressman Leo Ryan, is a vehement advocate of stronger gun laws. Representing the San Francisco area in Congress, she maintains a memorial wall to gun violence victims outside her Washington office.

Her newest legislation, H.R.4748, the “Imported Assault Weapons Ban of 2016” would prohibit by name the import of any of the 660 listed guns of the original 1994 Federal Assault Weapon Ban that expired a decade ago, as well as the 157 new guns added to that list by Rhode Island Democrat David N. Cicilline’s proposed 2015 Assault Weapon Ban. In addition to the named guns, any semiautomatic that has a fixed magazine of more than 10 rounds or can accept a large capacity detachable magazine would be prohibited from import.

For those semi-auto rifles that meet the magazine test, any feature such as a pistol grip, thumbhole stock, barrel shroud or threaded barrel would classify it as an assault weapon under the law. Similar restrictions are placed on gun parts, semi-auto shotguns, and other firearms.

The legislation has the backing of major gun control groups including the Violence Policy Center and Brady Campaign to Prevent Gun Violence.

However, Speier was somewhat misinformed as to what she said this week in reference to one of the guns used in the November 2015 Paris attacks. While news reports in early December mentioned a Serbian made gun was originally imported into the United States to Century Arms, the Associated Press later corrected that story as being false.

This is not the first time Congress has moved to further tighten gun imports in recent years.

In January, a coalition of 92 House Dems wrote the White House in an effort to ask the President to take executive action to ban imports of what they term “military-style assault weapons.”   This echoed earlier calls from Sen. Dianne Feinstein, D-California, and Speier herself in 2014 following the indictment of Leland Yee.

“This is yet another ineffective anti-gun proposal from an anti-gun member of Congress,” Lawrence Keane, senior vice president and general counsel for the National Shooting Sports Foundation told Guns.com on Wednesday. “Banning the lawful import of rifles for sale to law abiding Americans after a background check will do nothing to make our communities safer.”

The bill has been referred to the House Committee on the Judiciary.

This article has been updated with comment from the NSSF.