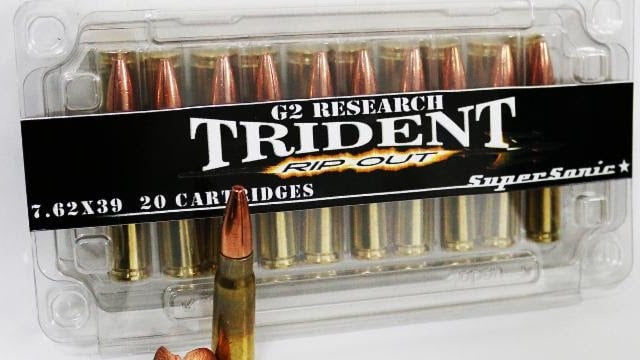 G2 Research, already well-known for the Radically Invasive Projectile pistol ammunition, has taken on the rifle scene as well with the new Ripout Round in 7.62×39. Like its RIP predecessor, the Ripout Round’s purpose is creating an action-stopping wound channel. Also like G2’s specialty handgun ammo, the Ripout Round is pricey.

This ammo is geared for any rifle, semi-auto or bolt operation, chambered in 7.62×39. Its pure copper bullet is an average 124 grain weight, and muzzle velocity is typical for the caliber at around 2,270 feet per second depending on barrel length. That’s where strong similarities to existing ammo end.

The Ripout Round is designed for serious penetration and expansion for big game. Their Trident bullet is constructed to stay intact past the heavy skin barrier to the 17 to 20-inch mark, and then expand into three “petals” which create a single wound channel the size of a quarter in diameter, or three times the bullet’s diameter. The company claims there’s little to no loss of bullet weight from impact to channel’s end.

G2 company spokesman Chris Nix says the round is “very efficient as a bush country hunting round and is suppressor-friendly.” The load is low-recoil, which surely makes follow-up shots quicker and easier.

At $56.99 per box of 20, most hunters and home defenders will save their Ripout Rounds for special occasions. G2 Research has invested in the CNC machining process for these rounds, along with premium cases and powder. These components inevitably boost production costs and price along with performance.