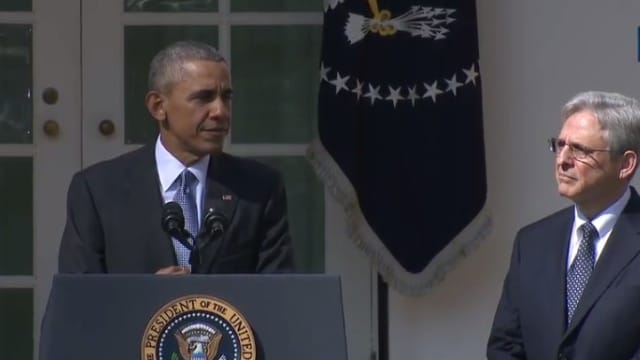 “Today, after completing this exhaustive process, I have made my decision,” said President Obama as he introduced DC Circuit Court Chief Judge Merrick Garland as his choice for the Supreme Court.

On Wednesday, President Obama named Merrick Garland, a current federal appeals court judge, to the open seat caused due to the passing of Justice Antonin Scalia.

The chief judge of the Court of Appeals for the District of Columbia Circuit since 2013, Garland came to the federal bench as a nomination by President Bill Clinton though his confirmation took almost two years to get through a Republican-controlled Senate in 1997.

Prior to his nomination, Garland worked in the Department of Justice as a Principal Associate Deputy Attorney General, leading the prosecutions in the high profile Oklahoma City bombing and unabomber cases.

“I have fulfilled my constitutional duty. Now it’s time for the Senate to do theirs,” said Obama. “He deserves our thanks, and he deserves a fair hearing,” although the GOP has gone on record as refusing to hold hearings on any nominee for the remainder of this session.

“This is the greatest honor in my life,” a tearful Chicago-born Garland said on the White House lawn, going on to except the day he was married and had his first child before speaking of his heritage as the descendant of immigrants fleeing anti-Semitism in Eastern Europe.

While he no doubt faces an uphill battle for Senate confirmation likely even more contentious than his first, he is described by many as a moderate and agreeable jurist, though others make clear he is not the conservative bulwark on the bench that Scalia was.

When Garland was mentioned in the past as a possible Obama appointment to the high court, Tom Goldstein with the Scoutusblog.com outlined his take on the potential justice.

“The point is not that Judge Garland is conservative,” wrote Goldstein. “None of the candidates under serious consideration is. Rather, there are gradations between the views of the three, and there are questions on which they would disagree. On a number of issues, particularly those related to criminal law, Judge Garland is the least likely to adopt a liberal position.”

However, as Second Amendment scholar and attorney Dave Kopel noted previously on Garland, “He could be counted on not only to oppose Second Amendment rights in general, but even to nullify explicit congressional statutes that protect those rights.”

Kopel based his judgment over how the jurist weighed in on two cases, NRA v Reno and Parker v. District of Columbia, supporting keeping gun buyer records on file six months in the former.

Garland is set to begin meeting with senators in the coming days while the Senate itself is on a two-week recess.