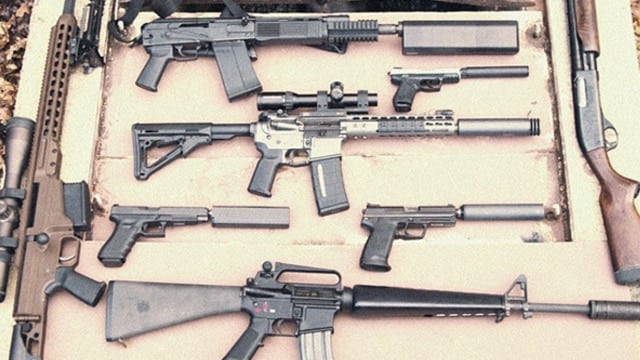 Suppressors, also known as silencers, are becoming an increasingly commonplace firearms accessory as gun sales continue to surge across the country.

This trend has no doubt been embraced and encouraged by the gun industry, although gun control groups have condemned silencers as a threat to public safety and attempted to push back against their acceptance.

Sales of suppressors — a National Firearms Act regulated item — have boomed nationally in recent years. In 2012 less than 361,000 people had registered suppressors under the NFA, a number that has climbed to nearly 793,000 as of 2015, according to the Bureau of Alcohol, Tobacco, Firearms and Explosives.

In response to the surge in silencer-interest, firearms manufacturer Sturm, Ruger & Company announced in January its own brand of suppressors. Ruger joins Sig Sauer as a major gun manufacturer also producing silencing accessories for their firearms.

Smaller gun company Radical Firearms has responded to the growing interest in silencing devices by releasing a line of modestly-prices suppressors for three popular rifle calibers, ranging from about $220 to $500.

The firearms lobby has been pushing for the loosening of restrictions on suppressors for the past several years. One recent attempt is the federal “Hearing Protection Bill,” introduced by Arizona Republican Matt Salmon last year. The federal measure would eliminate the $200 tax for the transfer of silencers, as well as remove the registration requirements for the acquisition of a suppressor. Salmon said the legislation would help “mitigate” hearing damage for soldiers and hunters — something he said he suffers after 50 years of shooting guns. The bill has been referred to the House Judiciary Subcommittee on Crime, Terrorism, Homeland Security and Investigations.

The Iowa House overwhelmingly approved — on a vote of 74-24 — similar state-level legislation in February. The legislation, which would repeal the state’s almost total ban on the NFA-compliant devices, could make Iowa the 42nd state in the nation to reduce restrictions on suppressors if approved by the Senate. That bill, HF2279, was amended and approved by an Iowa Senate Judiciary subcommittee on March 2.

Michigan became the 38th state in the nation to allow hunting with suppressors earlier this year, when the state’s Natural Resource Commission voted to scrap the state’s long-standing regulations prohibiting the use of the accessory by sportsmen. And another bill in New Hampshire that seeks to do the same is on its way to passage, having been recently approved by the state’s House.

According to the American Suppressor Association, there are currently 41 states that allow their citizens to buy and possess suppressors. However, due to federal law, as well as a lack of examiners, it can take four to nine months before the transfer is approved fully.

Pro-gun control groups — including the Violence Policy Center — have argued against the loosening of silencer restrictions, with VPC calling them “a threat to public safety.” A report by the VPC released earlier this year argued that the gun lobby’s “campaign to deregulate silencers” was simply the “latest attempt” of the lobby to market a new item and boost sales “in the wake of declining household gun ownership.”

In their report, the VPC contends that “making these weapons available to the general public with far fewer restrictions will ensure that their use in crime will increase.”

However, a 2007 study published in the Western Criminology Review found that the use of silencers in crimes is rare in the U.S., and their use is not “primarily connected to organized crime.” Additionally, the study showed there was little evidence that possession of a silencer made a criminal more dangerous of violent.

The NFA was initially passed by Congress in 1934 as a way to curtail transactions in firearms defined by the act due to the frequent use of these firearms in criminal activities. The act imposed a $200 tax on the manufacturing and transfer of guns identified by the act, as well as required the registration of such firearms. That tax has not changed since 1934.

In 1986 the Firearm Owner’s Protection Act amended the NFA and updated the definition of “silencer” to include any “combinations of parts for silencers and any part intended for use in the assembly or fabrication of a silencer.”