Woman armed with gun saves husband from mob of attackers 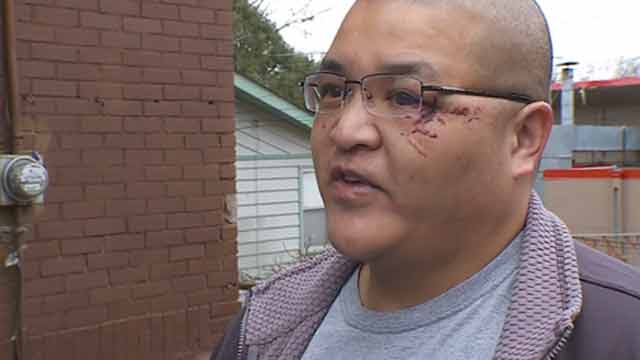 Bruce Chang said it was the high crime rate that prompted him and his wife to obtain concealed carry permits. (Photo: CBS)

When a man was attacked and beaten by a mob of youngsters outside of his St. Paul, Minnesota, home last week, his wife, who was armed with a handgun, came to his rescue.

Bruce Chang, 39, told a local CBS affiliate he was returning home from work on Monday, March 7, when he pulled up to his house and there was a group of about 15 to 30 young men gambling on his driveway.

But when Chang, who was blocked from his own driveway, asked the group to leave, they attacked him and began beating him with rocks and stabbing him with sticks. Chang said he felt the pressure near his left eye and fell to one knee, not knowing at the time he had been stabbed or how close he came to losing his eye.

While Chang, who has a permit to carry a concealed weapon, is typically armed with a Smith & Wesson .40-caliber handgun, he wasn’t carrying his gun at the time because his workplace prohibits it. Unarmed and outnumbered, Chang said he went into survival mode, not knowing what was going to happen next.

The mob continued to beat Chang, until his wife, who also has a permit to carry a concealed weapon, emerged from the house armed with a gun of her own. The group scattered, some of them leaving in a burgundy Saturn sedan. Although Change was beaten and bloody, he still managed to snap a picture of the car as it drove it away.

Now, he says he’s had enough of the crime in the neighborhood and he wants others to feel safe enough to come out of their houses too. Residents say crime is out of control and they are fed up.

Gary Worden has lived in the neighborhood for 25 years and called the police more times than he can count. He said there’s only so much they can do though, even with the recent increase in the number of patrols.

Chang said he is tired of living in fear in his own home, in his own neighborhood, and he is glad he and his wife stood up to his attackers.