2 shot after breaking into home of off-duty LAPD officer 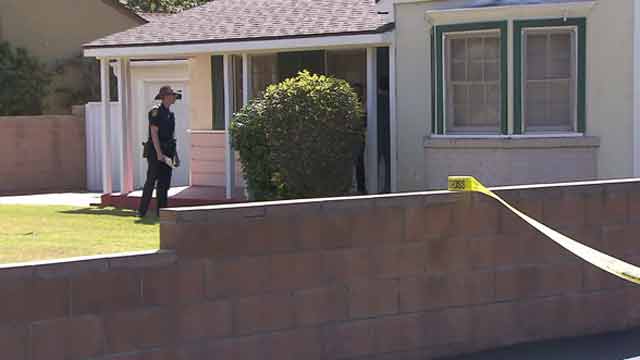 Residents say the neighborhood is normally quiet and to hear about such an incident is shocking. (Photo: KTLA)

Two young men are suffering from gunshot wounds after they broke into a San Gabriel home Tuesday morning and were shot by the homeowner, who happens to be a lieutenant with the Los Angeles Police Department.

The homeowner, whose name has not been released, was awakened just after 10 a.m. to the sound of unfamiliar footsteps in his home, local news station KTLA reported. The man got out of bed and discovered two intruders in his home, who immediately fled through a broken window in the kitchen when they saw him.

The homeowner chased the intruders out, but when one of the suspects reached toward his waistband, the homeowner feared he was reaching for a gun and fired several shots. Both suspects were struck, one in the leg and the other in the stomach.

Waiting in a car nearby was a getaway driver and a fourth accomplice. One of the suspects got into the car, leaving his wounded comrade behind. The other suspects drove the injured man to a local hospital, where he received treatment for the gunshot wound and was shortly thereafter detained by authorities, along with the other two accomplices.

Meanwhile, the homeowner, who has been on the force for nearly 30 years, and his neighbor, who is a doctor, treated the abandoned suspect on the scene until paramedics arrived and transported him to the hospital. That suspect remains in critical condition, while the homeowner was uninjured.

Now all four suspects are in police custody. None of their identities have been released at this point, but authorities describe them as “four young boys.”

The homeowner has been placed on administrative leave while the incident remains under investigation, which Meghan Aguilar, with the Los Angeles Police Department, noted was standard protocol for all officer-involved shootings, no matter where they occur or whether the officer was on or off duty at the time.