What do you do if you want to design a better AR15, without using any of the parts, technology, or patents involved with an actual AR15.

Well, if you are ArmaLite in the 1960s, you remember what you did with Eugene Stoner and get him to work it out, and not just to 16, but all the way to AR18. 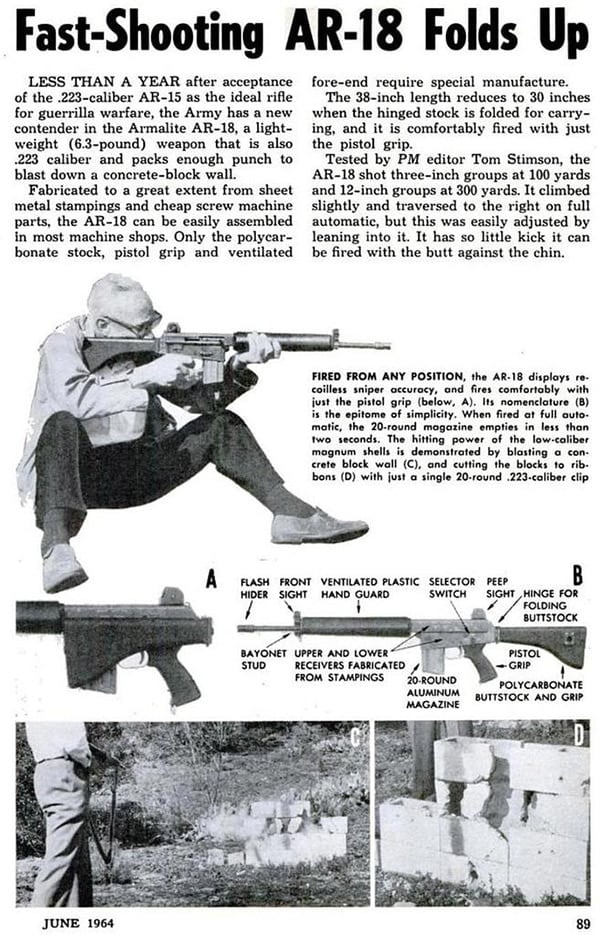 ArmaLite was a little known California based company that spun off from Fairchild Aircraft in the 1950s. With Eugene Stoner as their Chief Engineer, they produced a number of ArmaLite rifles (ARs). First came the AR-5/7 Survival Rifle, then the AR-10, then the AR-15, which was paydirt for the company.

Cashing out early in January 1959, they sold the designs and trademarks for both the AR-10 and AR-15 to Colt who, somewhat needless to say, did their own thing with them.

This however left the company with just their AR-7 22LR crash guns—not a diverse product listing for a company still looking to grow in size. Seeing how effective the AR-15 design had been, Stoner was tasked with repeating it.  But there was two catches.  One, it of course had to be better than the AR15 and, two, it couldn’t use any of the designs Colt now held the patents on lest they be seeing them in court. Stoner began work on what ArmaLite called first the AR-16, then the AR-18.

This new design, cooked up by Stoner and then taken over by Arthur Miller, George Sullivan, and Charles Dorchester, was a sheet metal, gas-piston operated rifle.  It kept the barrel of the AR15, but nothing else. 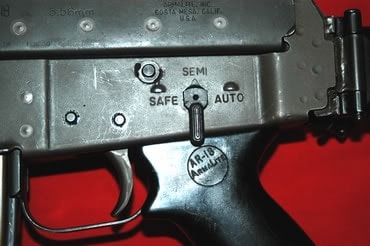 The selector switch like the rest of the gun is easy to figure out.

The upper and lower receiver was made from bent steel stamping, much like the AK. The stock, handguard, and pistol grip, like the AR15, were made of polycarbonate plastic. Speaking of stocks, the standard AR18 was designed so that the buttstock could pivot closed on a hinge just behind the receiver to the left hand side of the gun. This meant that with the pistol grip alone, you could still fire the gun from the hip, even one-handed if absolutely necessary.

The combination of plastic and sheet metal together made for a very light rifle, tipping the scales at just 6.3-pounds. Length overall, with its 18.25-inch barrel containing 6 1:12 grooves, was 38-inches, but when you folded the stock to the side, the gun was under 30.

Field stripped, it broke down into just a few components. Note the twin recoil springs. 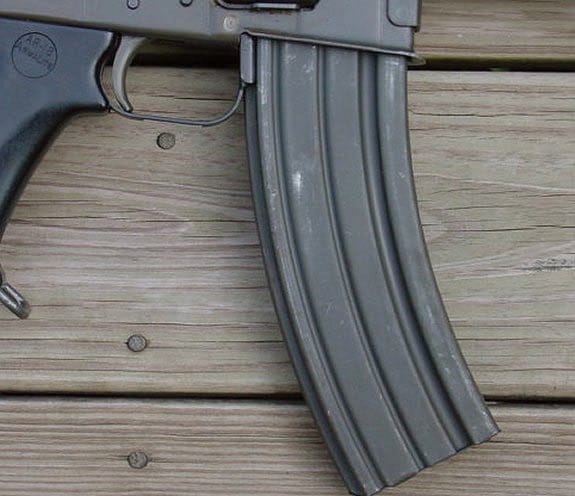 Since Stoner could not use any of the AR-15’s design, the bolt operation and action of the AR-18 were completely different from his earlier and better-known 5.56mm gun.

The bolt-handle of the AR-18 is located at the front of the action with a pull-bolt much like the one seen on a SKS. This charging handle is, since it’s attached to the bolt itself, also the forward assist and, likewise, the hold-open device when the magazine is empty. To keep it fed the gun came with aluminum 20-round box magazines that could be augmented by 30, 40, and even 50-rounders.

Overall, the AR18 feels much more like the AK than the AR15. Instead of direct gas impingement, the AR18 worked as a short-stroke piston driven gun. This kept the propellant gas outside of the receiver where it belonged, which helped ensure it stayed functional. 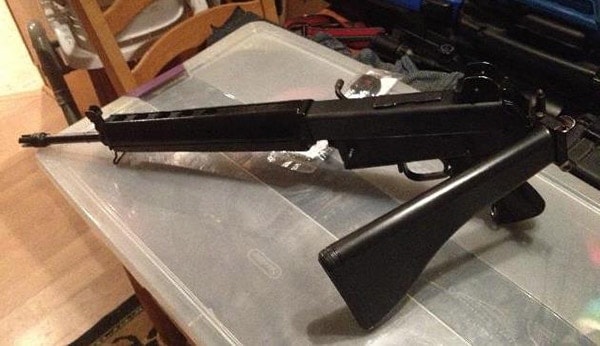 The folding stock was touted as a big selling point for the AR18. 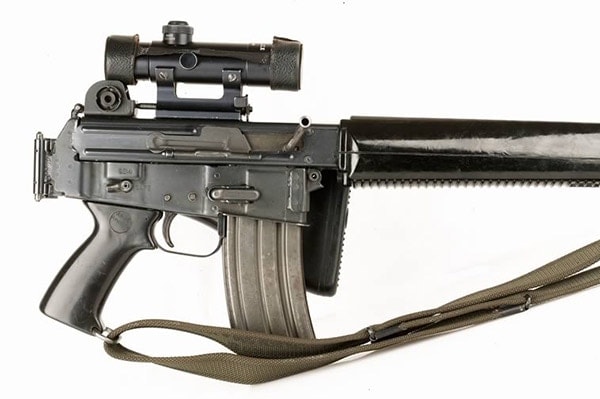 The new gun had a very high cyclic rate. So high, in fact that it would often work faster than the magazine could feed new rounds into the chamber. This bug was eventually fixed with a new magazine design and when operating well it could fire 800 rounds per minute cyclic. The standard US military M7 bayonet, M-3 bipod, and M1 sling could also be fitted. At the end of the barrel was a three-pronged flash suppressor that could launch all NATO standard rifle grenades. For marksmanship improvement, the company could ship it fitted with a 2.75x fixed power optic.

Cheaper and more reliable than the AR15, and more accurate than the AK47, the AR18 was set to conquer the world in 1969. Then reality hit. 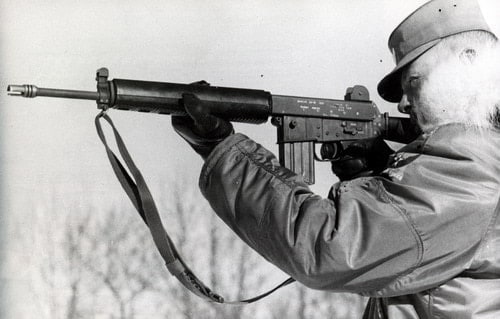 The AR18 was tested by the US military but never adopted.

The US Army tested the AR18 in 1964, but the aforementioned issues with the magazines were discovered immediately and ArmaLite didn’t get them fixed fast enough for Big Green to give it another look. Besides, the Air Force had already adopted the Colt-made AR-15 as the M16 and the Army was looking hard at them for use in a place called Vietnam.

The company shopped the gun overseas where it was politely declined, as it was still in the beta testing stage.  ArmaLite however continued to make the guns at their tiny Costa Mesa warehouse in small batches in hopes of future sales opportunities. They produced 1,171 select-fire AR-18s and 4,018 semi-auto only AR-180s at its California plant between July 1969 and June 1972. 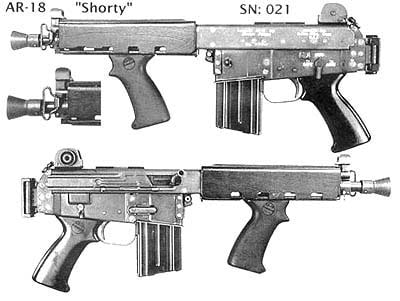 The Japanese firm of Howa in Nagoya made the gun in some quantity under license there for export sales in the 1970s as did Sterling Armaments in Essex, England (the same people behind the Sterling submachine gun). Sterling even made a more compact model, the AR-18K, which had a forward vertical grip. They pitched the gun to the UK Ministry of Defense unsuccessfully for years.

When you mention the UK and the AR18, you should know that it was (almost) the most iconic rifle of “The Troubles” in Northern Ireland during the last part of the 20th Century. Used by both the Provisional IRA and Irish security forces, it was photographed often; in fact, it is believed that as many as 2,000 of these rifles were smuggled into Ireland in the 1970s.

It became so well known that the English post-punk group Gang of Four even recorded a song in 1978 called “ArmaLite Rifle” which included lyrics that speak of the gun’s compactness (“Breaks down easy fits into a pram…”) and accuracy.  To this day, a popular fighting song amongst IRA-types in Ireland is “Little ArmaLite” which also sings to the guns praises.

On the opposite side of the law, the AR18 was seen as an inexpensive alternative to the AR-15 by many police departments in the US during the 1970s. They were so widespread that the old SWAT television show often featured them being used by the boys in blue. Speaking of the guns use in counter-terrorism, several AR18s were used by the New Orleans police against Mark James Robert Essex, the 1973 Howard Johnson’s sniper, with good effect. 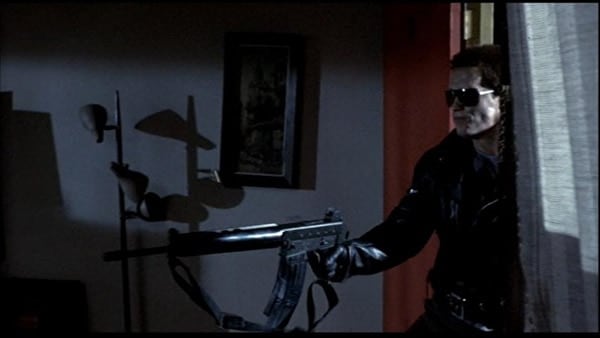 The Terminator also “checked in” to hotels with an AR18…

Still, the AR18 remains the redheaded stepchild to the other, more popular AR and has never got the love the final product truly deserved. It did however have a lasting effect on firearms designs for generations… 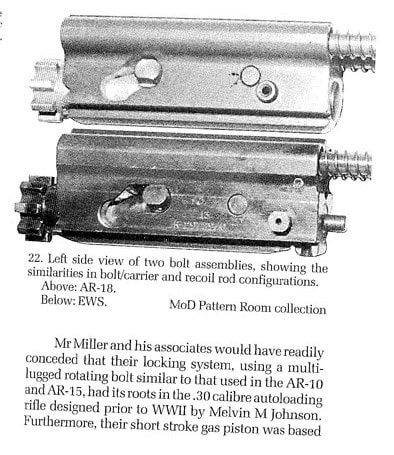 When the ArmaLite Model 18 was in its last days of production, weapons engineers at Enfield borrowed heavily from its design for ‘inspiration’ on their new 5.56mm rifle. Known then as the Enfield Weapons System and now as the L85, the bullpup rifle of the British military is at its heart a modified AR18 thrown into a radically different stock.

Borrowing a page from their Commonwealth partner, the Singapore-made SAR80/SR88 rifles have the same AR18 action. Nevertheless, the Brits got it honest, with both the Austrians and the Germans also using similar short-stroke gas piston layouts on the Steyr AUG and HKG36 rifles.

You could argue that if the AR18 hadn’t been made, these other weapons systems may have been very different and we continue to see gun makers, like MasterPiece Arms, toy with the design.

Old school AR18s, with the select-fire capability, are quite hard to put a finger on. As with anything Class III, they are worth just about whatever someone wants to pay for them. A better bet is in an AR-180, which was semi-auto only. 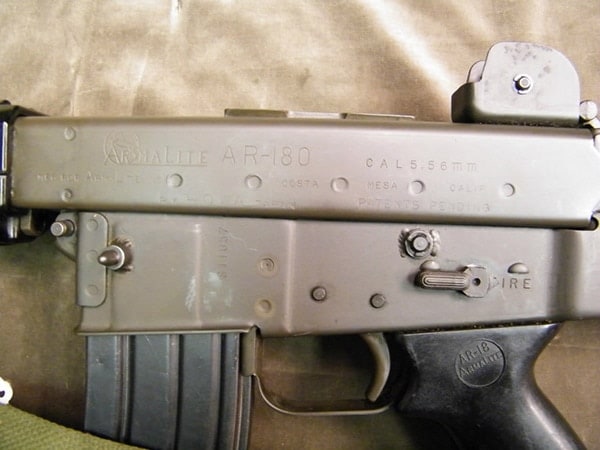 While the US-made guns are a bigger hit with collectors, the Howa and Sterling guns often have a better fit and finish. Prices on these 1970s pieces run from $1200-$2100 according to Fjestad and borne out by recent auctions. If you buy one, be sure to pick up as many spare parts as you can find and know going into it that nothing from an AR15/M16 (including the magazines) will work for you. Between ArmaLite, Howa, and Sterling, just over 20,000 of these guns were made between 1969-1983 so keep that small pool of parts in mind if you’d like to shoot yours.

In 1995 Eagle Arms of Geneseo, Ill bought all of the old ArmaLite trademarks and started to crank out guns under that new/old name. These included a rebooted ’18 that was made from 2003-08. Dubbed the AR180B, it had a polymer lower with a fixed stock (not folding). The company used AR15-style lower internals but kept the gun pretty much the same as the Nixon-era classic ’18 in the upper. Values of these are much less and can often be found for about the price of a used Mini-14 (which is tied directly to the gun control scare index).  These later guns will take an M16-style mag.

AR180B compact with 50 round magazine.

So rule of thumb: plastic lower and takes a M16 mag—cheap shooter, folding buttstock and doesn’t—nice collectable.  If you like redheads.