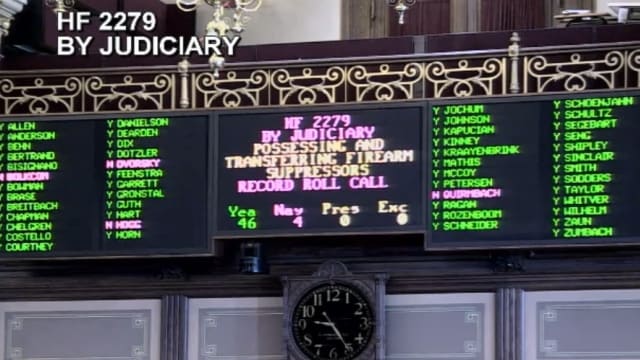 After a long and winding battle, Iowa is within striking distance of legalizing NFA-compliant suppressors.

Lawmakers in the Hawkeye State on Thursday approved a House bill that would make Iowa the 42nd state to allow civilian ownership of suppressors.

By a 46-4 vote, the bill to allow state residents to legally possess firearm suppressors so long as they are properly registered with the federal government found significant support. Coming on the heels of last month’s 74-24 win, the bill now just has to find concurrence on a minor technical amendment which would send it to the governor for signature.

The measure received bipartisan support, with Sen. Steve Sodders, D-Marshall, saying, “I think this is a good change, taking suppressors out of this particular section of our code and allowing those folks who would like to get one to get one a little easier.”

The measure, HF 2279, is a simple five-page bill to repeal the state’s near total ban on National Firearms Act-compliant sound muffling devices. Currently, the state prohibits private citizens from owning an otherwise legal suppressor. The only slim exceptions are for devices “possessed and used by a person solely for the purpose of shooting a deer pursuant to an approved city special deer population control plan,” and for use in law enforcement.

Concurrence in the House, which the American Suppressor Association says is expected, would place it on the desk of Gov. Branstad who, contends the ASA, has said directly that he will sign it into law.

Once he does, the law will take effect immediately.

“The passage of the Hearing Protection Act by the Iowa State Senate is a major step forward towards the legalization of suppressors in Iowa,” Knox Williams, ASA president, told Guns.com. “We are proud to be part of the team that has been working on this issue for the past three years, and are incredibly excited that Iowans are now one step closer to being able to protect their hearing while enjoying the shooting sports.”

Second Amendment groups, who have long championed the move in the state, welcomed Thursday’s vote.

“Today’s bipartisan Senate action is a major step toward legalizing firearm suppressors in the State of Iowa,” NRA state liaison Scott Rausch told Guns.com. “The work NRA, Iowa Firearms Coalition and American Suppressor Association have done together has made a great difference in moving this legislation forward.  But the real advocacy came from the thousands of gun owners across Iowa who contacted their legislators and urged the passage of the Hearing Protection Act.”