Lawmakers give big thumbs up to Idaho constitutional carry bill 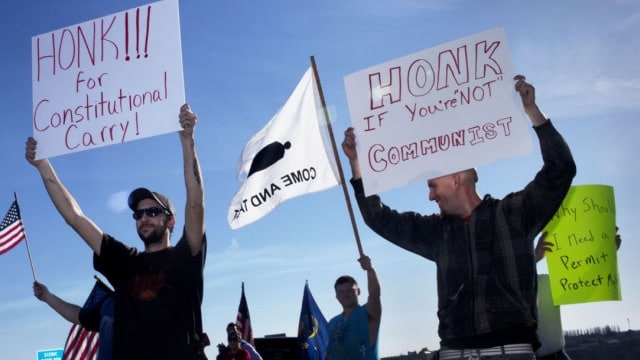 A bill to allow people to carry concealed guns anywhere in the state without a permit is halfway through the Idaho legislature. (Photo: Stephen Reiss/Idaho Times-News)

It was a landslide victory on Wednesday in the Idaho Senate for a measure that would allow those legally able to possess firearms to carry them concealed without a permit.

The chamber passed the newly introduced proposal in an easy 27-8 vote just days after its debut.

Idaho long allowed permitless concealed carry outside of city limits for those involved in hunting, fishing, or outdoor activities and in 2015 dropped the sporting requirement as a prerequisite – however, carry inside cities still requires a permit.

“What this does, it clarifies that in order to concealed-carry outside of city limits without a permit, it has to be a law-abiding citizen,” said bill sponsor Sen. Curt McKenzie, R-Nampa, March 17 on hearings for the proposal now in front of the House State Affairs Committee.

Under the proposed legislation, carry laws would largely homogenize across the state, allowing those over 21 who are legally able to possess a firearm to carry a concealed handgun statewide without first obtaining a permit, while those between 18 and 20 could still carry them outside of city limits and apply for a permit for carry in urban areas after receiving approved training.

The state has practiced a concealed carry permitting scheme for over a century, dating back to 1909, though it has been tweaked numerous times.

Those opposed to the bill are citing safety reasons to keep the current concealed carry laws for urban areas in place without modification.

“What is the harm, and why should we not require some basic gun training?” said Sen. Michelle Stennett, D-Ketchum. “The state requires a permit and some training to drive a car.”

The bill has the strong support of the National Rifle Association and state gun rights groups while various gun control organizations funded by former New York Mayor Michael Bloomberg are mounting a campaign to derail the legislation.

“The bottom line for this bill is it would dismantle Idaho’s popular century-old permitting system,” Hannah Sharp of the Idaho chapter of Moms Demand Action, told lawmakers on Thursday. “It would make it easy for criminals and people who have never had firearms safety training to carry concealed guns on the streets of our cities and our towns.”