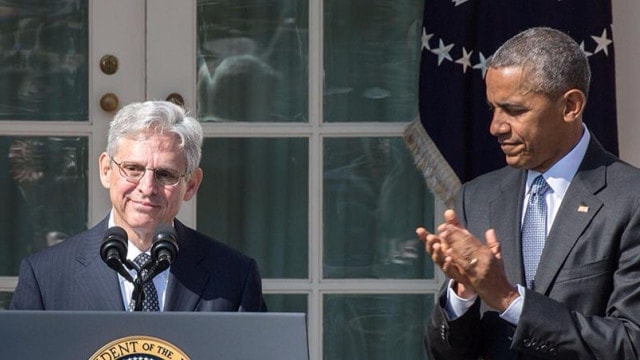 If confirmed as his choice for the Supreme Court, DC Circuit Court Chief Judge Merrick Garland will be President Obama’s third justice appointed to the nine-member court. (Photo: Whitehouse.gov)

While many groups rushed to endorse the President’s nominee to the Supreme Court, others feel the so-called moderate candidate is anything but when it comes to guns.

Nominated on Wednesday to fill the spot on the nation’s highest court left vacant with the sudden death of Justice Antonin Scalia, Garland was rapidly endorsed by Attorney Gen. Loretta Lynch, Senate Minority Leader Harry Reid and a host of liberal and mainstream groups, parroting the White House’s contention he had more federal judicial experience than any nominee in history.

Across the aisle, while some Senate Republicans have announced they would meet with Garland, including Sen. Chuck Grassley of Iowa and Kelly Ayotte of New Hampshire, Majority Leader Mitch McConnell phoned the current appeals court judge and told him no action would be taken on his nomination.

“Rather than put Judge Garland through more unnecessary political routines orchestrated by the White House, the leader decided it would be more considerate of the nominee’s time to speak with him today by phone,” said McConnell’s spokesman, Don Stewart.

The National Rifle Association contends Garland is unacceptable and is the “most anti-gun nominee in recent history” according to a statement emailed to Guns.com.

“In fact, a basic analysis of Merrick Garland’s judicial record shows that he does not respect our fundamental, individual right to keep and bear arms for self-defense,” said Chris W. Cox, executive director, NRA-ILA. “Obama has already nominated two Supreme Court justices who oppose the right to own firearms and there is absolutely no reason to think he has changed his approach this time.”

Elaborating on Garland’s past record as a jurist, attorney and Second Amendment scholar, David Kopel, was frank on Wednesday. “A vote for Merrick Garland is vote to repeal the Second Amendment,” he told Guns.com.

Besides a 2005 vote against rehearing Seegars v. Gonzales that attacked Washington D.C.’s strict gun prohibitions, in 2007 Garland weighed in on a subsequent case, Parker v. DC, which at the time was perhaps the most significant gun rights issue in the courts. The court denied the request to rehear the case, by a 6-4 vote.

“After a D.C. circuit ruled in favor of the Second Amendment as an individual right in the case that eventually became the Supreme Court case of Heller, Judge Garland was in a minority on the D.C. Circuit that voted to grant a re-hearing en banc which are typically created for the purpose of returning the decision of the three judge panels,” said Kopel.

An even earlier case, NRA v. Reno, in which Garland voted along with other judges in the circuit that, although federal law prohibited retention of gun background check information to stave off a potential back door gun registry, it was OK to keep the records for six months for the sake of auditing purposes. This, contends Kopel, was a stretch to justify.

When asked to read the tea leaves as to what the future holds on Garland, Kopel refrained from predicting, but did warn that should the President’s choice fill a seat on the bench, now divided 4-4 between conservative and liberal justices, gun rights would suffer.

“I think Senate Majority Leader McConnell will hold firm and stop this nomination — because if he doesn’t then the Second Amendment will be repealed, judicially nullified,” Kopel said.

Others contend the nominee may not be that bad, and, in the case of his apparent support of DC’s gun prohibition scheme, at least — where he was joined by conservative Judge Raymond Randolph — may have just been going along with established precedent.

“Judge Garland will surely encounter some opposition for his vote in 2007 against recognizing an individual right to bear arms in the Second Amendment,” UCLA Law Professor Adam Winkler told Guns.com. “But the law then was clear: Every other federal court of appeals had ruled the same way based on Supreme Court precedent. His vote against gun rights may well have been based on precedent — exactly what conservatives say they want from a judge.”