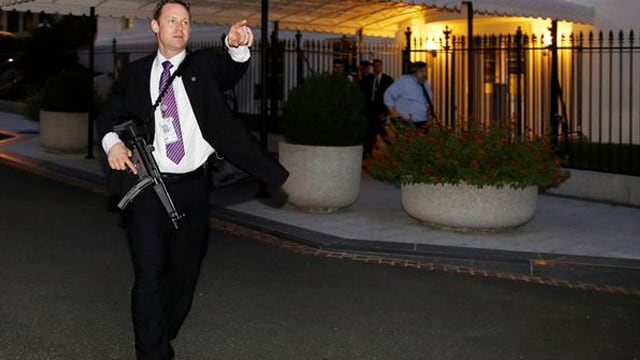 A Secret Service agent with an automatic rifle hurries people to evacuate White House grounds over a security alert moments after President Obama left for a presidential retreat on Sept. 19, 2014. (Photo: Reuters)

The U.S. Secret Service will host a conference with vendors early next month to discuss a solicitation package for a new rifle, according to an announcement posted Monday.

The agency will host 40 vendors at its headquarters in Washington, D.C., on April 4. At the pre-solicitation conference, the agency’s procurement division will detail how it will evaluate vendors and secure the contract.

Details about the rifle are listed in the statement of work, which was not available on the solicitation page. However, Soldier Systems shared details from the document.

The agency lists specifications for the rifle without accessories as 8.5 inches tall, 34 inches long, and weighing no more than 7.5 pounds. It also includes a 5.56mm chambering, and a 10- to 12-inch long barrel with a 1-in-7-inch twist and service life of 20,000 rounds.

The rifle should feature ambidextrous controls, a direct-impingement gas-operated system or a short-stroke gas piston system, and have a select-fire option — burst is not acceptable.

Interested parties are expected to RSVP by March 25, but seating is limited to 40 and will be on a first come, first serve basis.