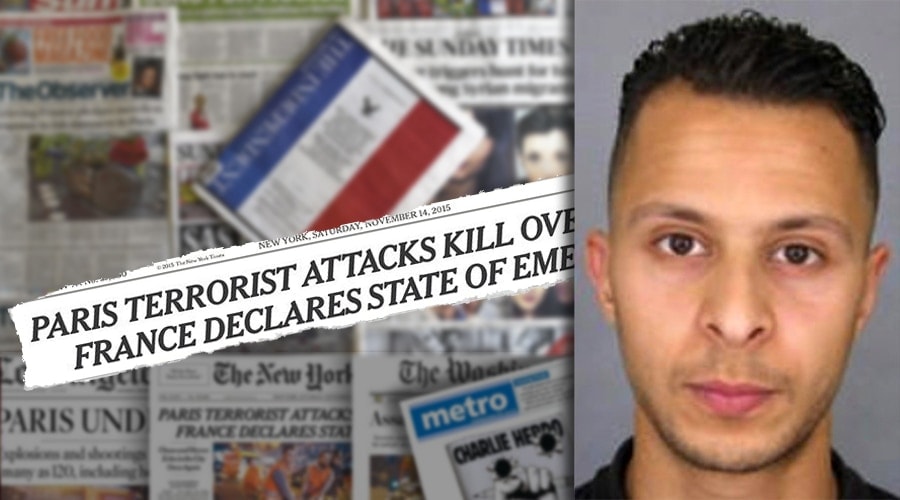 French and Belgian authorities on Friday arrested a man suspected of participating in three coordinated terrorist attacks in Paris more than four months ago.

Twenty-six-year-old Salah Abdeslam was hooded and in restraints as police escorted him from the Brussels neighborhood of Molenbeek, the New York Times reported. The hooded figure can be seen limping in a Reuters video of the capture, reportedly the result of law enforcement shooting the suspect in the leg as he emerged from a house with a handgun and ran down the street. Two other men were also reportedly wounded during the arrest and five were detained. Two of those are believed to have harbored Abdeslam.

“This evening is a huge success in the battle against terrorism,” Belgium’s prime minister, Charles Michel, said during a news conference with French President François Hollande.

Abdeslam’s apprehension brought to close a four-month manhunt for the Belgian-born French citizen who authorities believe was the getaway driver for one of three teams that carried out synchronized attacks in which 130 people were killed and another 368 were wounded on Nov. 13. Abdeslam was the last surviving suspect of the group of 10 and was believed to have been on the team that carried out the attack outside of the French national soccer stadium, where three suicide bombers struck.

Following the attacks, Abdeslam reportedly tossed his suicide vest in a trash can and then drove to Belgium where he hid. Cities like Brussels and Paris have a large Muslim populations and reportedly provide cover for terrorists’ vast support networks.

Belgian police discovered Abdeslam’s fingerprints in an apartment raided in a different neighborhood on Tuesday, when accomplice Mohamed Belkaid was fatally shot, the Times reported.

The Islamic State claimed responsibility for the attacks, which the group claims was retaliation for French airstrikes on ISIS targets in the Middle East.

“The president commended the work of Belgian security services and noted that this significant arrest was the result of hard work and close cooperation between Belgian and French law enforcement authorities,” the White House said in a statement.

Some 89 of the total deaths occurred at the Bataclan concert hall during an Eagles of Death Metal show. Singer Jesse Hughes told a French TV news network last month he thought peoples’ lives could have been spared had some at the venue been armed.

“Did your French gun control stop a single fucking person from dying at the Bataclan?” California native Jesse Hughes asked. “And if anyone can answer yes, I’d like to hear it, because I don’t think so. I think the only thing that stopped it was some of the bravest men that I’ve ever seen in my life charging head-first into the face of death with their firearms.”

Despite the country’s strict gun laws, France is still awash in illegal firearms, reportedly because it’s difficult to police its 1,795-mile border, which some 30,000 illegal guns were smuggled across in 2012. An estimated 4,000 were “war weapons,” a French publication found.