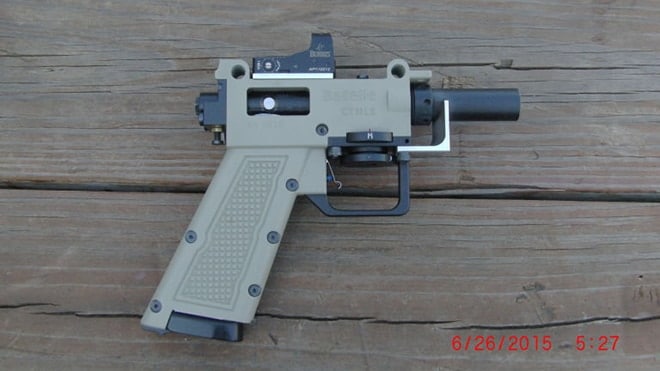 First, a brief background on terminology. In this case, and in many cases like it, the correct term is just that: less lethal. Non lethal means there’s not a chance of the ballistic projectile or other instrument to be lethal. That’s why “less lethal” is used more commonly now compared with “less-than-lethal” or “non lethal.” ‘Just a little background history that I think is important. I’ll tell you why.

This .50 cal bullet is caseless. I’ve handled and shot .50 cal rubber bullets before from a special revolver and an AR designed specifically to shoot only .50 cal less lethal rounds. They would leave quite a bruise—potentially a life threatening bruise. These tools didn’t really take off in the law enforcement world however.

But this invention from Battel seems a lot different than the guns I shot years ago from Lamperd Less Lethal.  For one thing the inventor of the Pogojet claims that this round will fire at 100 meters or at 20 meters with the same ballistic speed. The claim is that it will be safe at short and long distances.

I think that would make it one of most amazing rounds ever. Think of that, a muzzle velocity that is consistent from zero to 100 meters. Currently, I know of nothing else that will do something like that. If a round, say a 40mm less lethal round, can shoot 100 meters, that would mean up close it would be traveling too quickly and thus injure someone more seriously up close.

Like I said, this new technology is pretty mind boggling, but I’m not sure it will be all that effective in the field for two reasons.

First, why would you need to shoot anyone that far away with a less lethal tool? Now, we can what-if this all day long. One good reason I could see is to have a greater standoff distance for police. But that would require a truly unique situation for an officer to use a less lethal round at 75 meters.

Perhaps a SWAT situation that was outside in an open space. Perhaps a riot. But if the suspect is that far away, could the round travel quickly enough to hit the person in the right area before they move, potentially making the suspect getting hit severely injured (e.g., taking a round in the eyeball)? I see a lot of questions and legal issues here, not to mention tactical concerns and considerations.

Could it have a military application? Sure, but there are still the same tactical limitations.

Second, shooting someone with a .50 cal round in the thigh or perhaps in the upper arm is pretty much the only place to shoot someone safely enough for it to hurt them enough to have “pain compliance,” but not injure them in ways that it would be damaging. Sure, you could hit them in the legs or perhaps in the back, but if a round that size hits them in the eyeball, the throat or even over the heart, that could potentially prove lethal, depending on the speed. Remember, there needs to be enough speed and enough pain (made by the material) for people getting shot to comply.

Regardless, I’m supportive of this project.  Just think, if the technology can be created in a .50 cal, there may be development in the future for a 40mm round that could shoot even farther. But even if the technology is made, zapping someone that far out, say with a Taser round, there would still be a lot of unanswered tactical questions. For instance, how long would a suspect have to get shocked before officers could actually go hands-on?

In the end, it seems pretty interesting. Now it’s time for human testing.  Any volunteers?