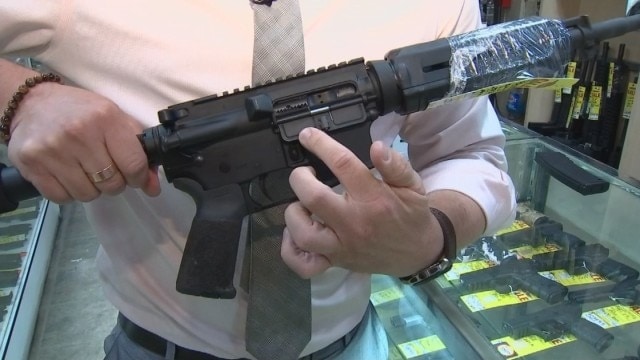 According to reports, the officer had, “you’re f*****” on the inside of his dustcover, which probably wouldn’t be an issue if we wasn’t facing a murder charge already. (Photo: KTVK)

A Mesa, Arizona lawman is getting some heat after an officer involved shooting that includes raised eyebrows over his choice of dustcover for his AR.

According to KTVK, Officer Philip Brailsford, currently free on bond over a second-degree murder charge in the shooting of Daniel Shaver, killed the man while on his hands and knees inside a Mesa hotel room. While Brailsford used a personal AR-15, which was approved, to shoot Shaver four times, authorities noted an engraving on the inside of his dustcover did not meet department policy.

“That statement tells me this is a person who’s enthusiastic about killing people,” Marc Victor, lawyer for Sweet and her late husband, argued. “That’s what that inscription means.”

Since KTVK’s story, The Truth About Guns and other sites have covered the dustcover dustup and several tactical gurus have been quick to jump on the “told you so” train.

Former Delta Force operator Larry Vickers posted on social media, “Big lesson to be learned here for those of you who put inscriptions on the dust cover of your AR’s – I for one have preached against this for years,” while Jim Fuller with Rifle Dynamics, one of the leading AK experts in the country, wrote, “Folks, we get requests to engrave things on guns all the time, some things we will not engrave and this is why.”