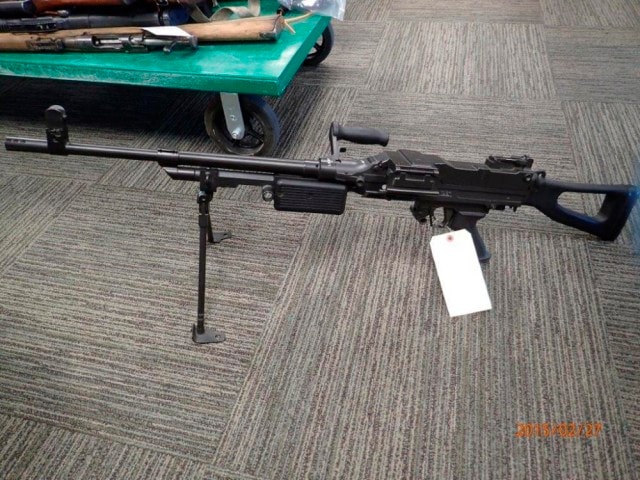 The highly-regarded SS-77 is rarely encountered in the States, which made it all the more unusual that a suspected meth dealer and murderer had it in with his Christmas decorations. (Photo: ATF via ABQ Journal)

A South African machine gun linked to a 250 weapon theft by the granddaughter of a Democratic Senator was found in the storage unit of a suspected murder.

The firearm, a Vektor SS-77 belt-fed machine gun in 7.62x51mm NATO, was found in a locker belonging to Marcos Delgado as reported by the Albuquerque Journal.

Delgado, 46, took his own life in 2014 at the conclusion of a four-day manhunt following the shooting that left his ex-girlfriend dead and three others wounded. Authorities following up on the case located the weapon last year.

The SS-77, based on the Soviet PK machine gun and designed in the late 1970s to augment the South African military’s dwindling supply of infantry weapons caused by an international arms embargo during the apartheid era, is still in production by Denel Land Systems. Few were imported into the U.S.

How the gun made it into the criminal underworld came from a 2009 storage unit break-in at a Torrance County facility leased to Stuart Anderson, a licenced firearms dealer. Among those charged in the theft was Anderson’s sister, Sheryl, whose grandfather was the late U.S. Sen. Clinton P. Anderson– a powerful New Mexico Democrat who once served as President Harry S. Truman’s Secretary of the Agriculture.

Of the estimated 250 firearms stolen in that theft, for which Sheryl Anderson is now serving time, less than 30 have been recovered including five by Mexican police.